The U.K. Royal Mint has issued a 50-pence coin commemorating the late physicist Stephen Hawking, who died nearly one year ago at age 76.

The collector’s coin, which is selling online for $10 pounds, depicts Stephen Hawking’s name surrounded by lines that form concentric circles representing a black hole. Written above his name on the coin is the Bekenstein-Hawking formula, which describes black-hole entropy, and shows that the surface area of a black hole expands as it consumes more matter. It also supports the idea that black holes aren’t completely black.

“This is such a lovely way to commemorate him and his legacy,” said Lucy Hawking, Stephen Hawking’s daughter known for her work as a children’s novelist and science educator. “It’s a 2D surface that seems to have a 3D image on it. It’s as though you could fall into the black hole.”

Coin designer Edwina Ellis said she “wanted to fit a big black hole on the tiny coin and wish he was still here chortling at the thought.”

“The initial inspiration was actually Stephen Hawking’s description of black holes,” Ellis said. “It was only afterwards I realize I hadn’t used anybody else’s graphic imagery because he gave it to me.” 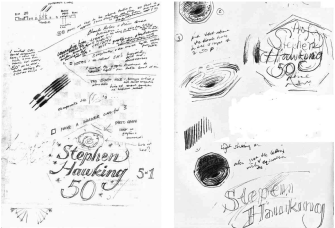 It’s not the first time the Royal Mint has commemorated scientists on U.K. currency: Sir Isaac Newton appears on a 50-pence coin and Charles Darwin can be found on a 2-pound coin. Hawking’s younger son Tim said he thinks his dad would’ve been happy to have been celebrated in such a way.

“He would’ve been thrilled to know that there was a coin commemorating him and his work,” said Tim Hawking, Stephen’s younger son. “I think I have a very clear sense of him with one of his huge, wide smiles.”

After spending decades working on what he called “the big question: Where did the universe come from?”, Hawking is remembered not only for his numerous scientific contributions to cosmology, general relativity and quantum gravity, but also for his warm and ever-curious personality the world came to know through his role as a popular science educator.

An extra special day at The Royal Mint. We are delighted to have welcomed Lucy and Tim Hawking who struck their very own coins to commemorate their father’s outstanding contribution to science. See behind the scenes of their visit! http://ow.ly/CCJF50mYIt6  @HawkingFoundpic.twitter.com/d5FYwFCPOl

Hawking spoke to Big Think years ago about the future of humanity.

“I’m an optimist. If we can avoid disaster for the next two centuries, our species should be safe, as we spread into space.”

To Hawking, this will require not falling prey to our worst tendencies.

“Our genetic code still carries the selfish and aggressive instincts that were of survival advantage in the past. It will be difficult enough to avoid disaster in the next hundred years, let alone the next thousand or million. Our only chance of long-term survival, is not to remain inward-looking on planet Earth, but to spread out into space. We have made remarkable progress in the last hundred years. But if we want to continue beyond the next hundred years, our future is in space.”

A belief in meritocracy is not only false: it’s bad for you

Most people don’t just think the world should be run meritocratically, they think it is meritocratic.