If Earthly destinations are not enough to quench your wanderlust, a trip to a space hotel might get on your radar within the next few years. The designer of the Von Braun Space Station revealed numerous plans that detail the construction of a veritable resort in space.

Built by the Gateway Foundation, the world’s first space hotel will have gravity, bars, inviting interiors and full-fledged kitchens. They plan to have the station visited by about a 100 tourists per week by 2025.

The designer of the project, Tim Alatorre, wants to make traveling to space commonplace.

“Eventually, going to space will just be another option people will pick for their vacation, just like going on a cruise, or going to Disney World,” Alatorre revealed in an interview with Dezeen. 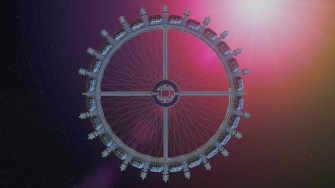 The gravity-generating wheel of the space station.

He thinks that while initially space travel will be the domain of the uber-wealthy, soon enough it will be available to regular folks.

The Space Station will utilize existing tech used at the International Space Station, but will differ in one crucial aspect – the hotel will have artificial gravity, making long-term stay much more manageable. The designer thinks gravity, about a sixth of Earth’s, will add a “sense of direction and orientation that isn’t present in the ISS.” You’d also be able to go to a toilet, shower or eat food the way you are used to. 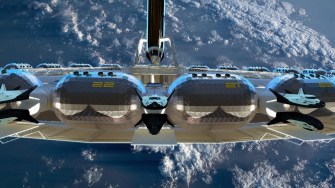 The ideas for the station were taken from none other than Wernher von Braun – hence its name. If you recall, Wernher von Braun was a top Nazi rocket scientist who developed the infamous V2 rocket. After the war, he was taken in by NASA and became a famous American scientist. The hotel will be a part of his complex legacy.

The station will be made of a giant wheel, 190 meters in diameter, which will be rotating to generate a gravitational force (similar in pull to the moon’s). 24 individual modules with sleeping and support facilities will be spread around the wheel on three decks, providing accommodations to about 400 people in total.

Alatorre compares the hotel to a cruise ship, pointing out it will have “many of the things you see on cruise ships: restaurants, bars, musical concerts, movie screenings, and educational seminars.” Just in space. 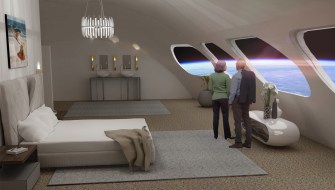 “The dream of the Gateway Foundation is to create starship culture, where there is a permanent community of space-faring people living and working in Earth’s orbit and beyond,” shared Alatorre. 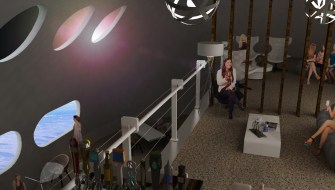 Some of the modules could be sold like condos. Others will be available for scientific research to governments and the like.

The designer explained that the interiors of the hotel will be created using modern natural materials that would substitute for stone and wood and be lightweight and easy to clean. The warm-colored lighting, paints and textures will add to a homey feel.

If you’re wondering what you can do for fun in such an environment, the designers are planing to provide such activities as low-gravity basketball, trampolining and rock climbing. You can also play something akin to Quidditch from Harry Potter and new games that would have to be figured out to take advantage of the fresh possibilities.

How will the station be built? By using automated systems like drones and robots, while in orbit. It will also make use of GSAL, special space construction machinery developed by Orbital Construction.

Looking ahead, the Gateway Foundation sees the Von Braun Space Station as their proof of concept. They intend to build bigger space stations as demand for such vacations grows. Their next class of station is called The Gateway and can accommodate more than 1,400 people.

Tags
artificial intelligenceautomationcosmoshistorynasarobotsspacetourism
In this article
artificial intelligenceautomationcosmoshistorynasarobotsspacetourism
Related
Strange Maps
The horrors of World War II air war, in one stark map
This graph shows how badly German cities were hit by Allied bombing raids.
High Culture
Why are flood myths so common in stories from ancient cultures around the world?
Could the prevalence of flood myths around the world tell us something about early human migration or even the way our brains work?
The Past
The Wild West was lawless and chaotic — and the police helped keep it that way
Lawmen and outlaws were often the same people.
Thinking
6 great philosophers and how they used their political power
Most philosophers merely contemplate the world, but what about the ones who actually tried to change it?
The Past
Ancient migration: Bering Strait land bridge from Asia to North America was not a one-way road
Ancient humans crossed the Bering Strait land bridge from Asia into North America. But some of them went back.
Up Next
Think Again Podcasts
a Think Again mixtape for 2019
When I was a teenager and music was still on cassettes, a mixtape was an act of love. In this episode, I’m putting together some of my favorite moments of 2019, strung together with minimal interruption from me.