A new study about one of the most inexplicable places in the cosmos may offer the first proof that we are living in a multiverse.

The idea of a “multiverse” proposes that an infinite amount of universes, including the one we are living in, exist in parallel to each other. These universes differ in a variety of physical properties, featuring multiple Big Bangs, space bubbles and maybe even an alternate version of you who is reading this article in a world run by slugs. The “multiverse” hypothesis has been so far been impossible to test but has supporters among such scientists as Stephen Hawking, Michio Kaku, Neil deGrasse Tyson and Leonard Susskind.

The study by British astronomers focuses on what’s known as the “Cold Spot” – an especially cold area of space that has been observed in the microwave background radiation coming from the early Universe 13 billion years ago. Usually temperatures of the radiation vary throughout the universe, but this area of coolness is much larger than others (about 0.00015 degrees Celsius colder than its surroundings). 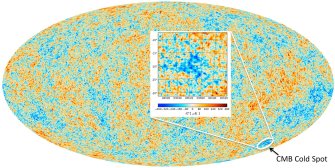 The Cold Spot, first found by NASA in 2004, is a strange place 1.8 billion light years across that doesn’t comfortably gel with existing cosmological models. One explanation is that it simply doesn’t exist, being just an illusion created by the expansion of the universe. Spaces with lower amount of galaxies or “voids” form as the expansion accelerates. With 10,000 fewer galaxies, the Cold Spot would be a “supervoid”.

But the study, published in UK’s Royal Astronomical Society, claims to prove that the supervoid is not a valid solution to the Cold Spot’s mystery. The researchers think that instead of one giant emptiness in that area, there are galaxy clusters gathered around smaller bubble-like voids. And, significantly, these would be too small to be responsible for lowering the temperature in the Cold Spot.

In fact, other answers must be sought. The scientists, led by postgraduate student Ruari Mackenzie and Professor Tom Shanks in Durham University’s Centre for Extragalactic Astronomy, think one possible hypothesis is that the Cold Spot resulted from a collision between our universe during its early days and another universe. The energy release of such an impact would have created the Cold Spot.

“We can’t entirely rule out that the Spot is caused by an unlikely fluctuation explained by the standard model. But if that isn’t the answer, then there are more exotic explanations. Perhaps the most exciting of these is that the Cold Spot was caused by a collision between our universe and another bubble universe. If further, more detailed, analysis of CMB [Cosmic Microwave Background] data proves this to be the case then the Cold Spot might be taken as the first evidence for the multiverse – and billions of other universes may exist like our own,” said Professor Tom Shanks.

The multiverse, while an exciting idea, has its detractors. Some physicists feel since it’s not something observable or provable, then a discussion of it is pointless or even unscientific. But when more ordinary solutions come up empty, the doors of science open wider.

Check out this video by Michio Kaku for more ideas on multiverses:

Water is vital for life. Luckily for spacefaring humans, the solar system is full of it.
Up Next
Starts With A Bang

What if cosmic inflation is wrong?

The earliest stages of the Universe, before the Big Bang, are what set up the initial conditions that everything we see today has evolved from. Image credit: E. Siegel, with […]