Scientists studied the bodies of dolphins, whales, and seals that washed ashore in the United Kingdom. Every single one of them had microplastics in them. 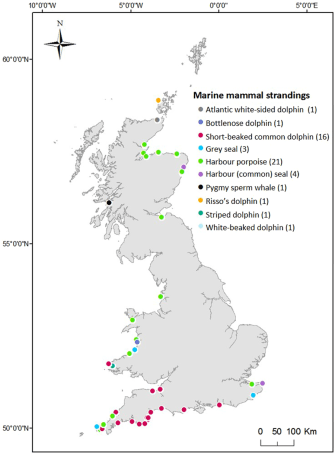 Sites where the animals had washed ashore

The University of Exeter and Plymouth Marine Laboratory (PML) examined the bodies of the animals and made the discovery. In all, 50 animals were studied, and they represented 10 distinct species of seals, whales, and dolphins.

“It is disconcerting that we have found microplastic in the gut of every single animal we have investigated in this study,” said Dr. Penelope Lindeque, from PML.

The vast majority of the microplastics — 84 percent — were “synthetic” fibers, which come from washing synthetic clothing, fishing nets, and — gasp! — toothbrushes. The most prevalent particle type was nylon, at about 60 percent. 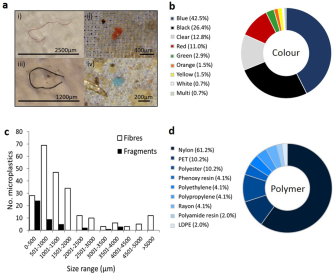 The rest were fragments (defined as smaller than 5 millimeters, or about 0.20 inches) from plastic bottles and other consumer packaging, runoff from tires and paint on roads, and more. Some enter the food chain via the fish that these animals feed on, such as mackerel — which have consumed the microplastics along the way themselves — in what’s known as trophic transfer. In other words, not from directly ingesting plastic. Others enter the food chain when plankton eat tiny microbeads.

Previous research has led to the conclusion that organ damage is possible, depending on the animal involved and how much microplastic is consumed. Notably, pesticides are “attracted” the surfaces of plastic, which means they can build over time in the body of an animal that has ingested some of those plastics.

Sources of plastic that end up in the food chain.

In these cases, however, because the number of particles was relatively low, at a mean of 5.5 particles per animal, it’s assumed that all would have passed through the animals. Notably, however, the stomach was the primary location of most of them, which means they linger there.

Still, this study at least sets a benchmark that future studies will build on.

“Marine mammals are ideal sentinels of our impacts on the marine environment, as they are generally long-lived and many feed high up in the food chain. Our findings are not good news,” said Brendan Godley, of the University of Exeter.

Pando, which is Latin for “I spread,” is a single organism spanning some 106 acres.
The Future

Aerial drones can perform some pretty impressive feats, from high-speed dovetails to hovering almost perfectly still for long periods of time. But in terms of landing, drones have nothing on […]
Life

Washington, D.C. will feel like present-day Mississippi by 2080, researchers say

In one generation, the climate of many American cities will experience a noticeable shift.