If you had enough of the often-depressing world events and the seemingly unresolvable conflicts they engender, you might want to head for space and join the first-ever “nation state in space” that’s been announced by a team of scientists and legal experts. It’s called Asgardia and anyone can become its citizen.

As the site for the project explains, Asgardia is a name that comes from Norse mythology, where Asgard was the name of a city in the sky. In the Marvel universe, Asgardia was built was Tony Stark and ruled by the All-Mother (since Odin was in exile).

Asgardia is the brain-child of the accomplished Russian scientist and businessman Igor Ashurbeyli, who describes the motivation behind this endeavor as an attempt to create a nation founded on “Peace in Space, and the prevention of Earth’s conflicts being transferred into space.” The idea is to create a “mirror of humanity in space” in low-Earth orbit that would be devoid of Earthly divisions based on borders and religions. As Ashurbeyli says: “In Asgardia we are all just Earthlings!”

Besides avoiding Earth-linked divisions, another key goal for the nation would be to protect Earth from space threats, like comets, asteroids, debris, cosmic radiation and infection by extraterrestrial microorganisms.

To make this space nation a reality, Ashurbeyli wants it to achieve recognition from the United Nations, aiming to have a million people sign up to become the new country’s citizens via their website. The initial citizens are likely to be those who work in the space industry already, but anyone can join. The initial goal for the founders was to get 100,000 citizens to sign up, but the number of interested people hit 300K in less than a week and is going up rapidly. 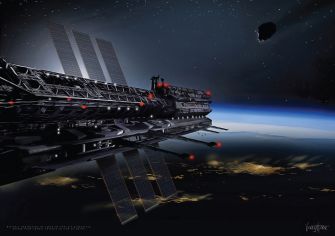 The next step for Asgardia – launching its first satellite in 2017. This will become its first outpost in space, while its citizens will still be Earth-bound. A space station would eventually follow.

As Igor Ashurbeyli explained to the Guardian:

The new country will be democratic but not ruled by Earthly laws or the existing space laws. Its founders envision the need for a new “‘Universal space law’ and ‘astropolitics’.

“The existing state agencies represent interests of their own countries and there are not so many countries in the world that have those space agencies,” elaborated Ashurbeyli. “The ultimate aim is to create a legal platform to ensure protection of planet Earth and to provide access to space technologies for those who do not have that access at the moment.”

Whether this effort succeeds, especially in light of the existing space treaty, is of course open to debate, while legal minds are not dismissing it outright.

The Asgardia team’s legal expert Ram Jakhu, the director of McGill University’s Institute of Air and Space Law in Montreal, told Space.com their plan is for Asgardia to have the minimum number of citizens, a government, and an inhabited spacecraft that would be its territory. This would hit 3 of the 4 criteria by the U.N. to become a nation state. The last hurdle is recognition by other U.N. members.

To learn more about Asgardia, to sign up as one of its first citizens, or to come up with the new space nation’s flag and anthem, head here.

Tags
Asgardiafirstnationspace
In this article
Asgardiafirstnationspace
Related
Life
“I went to space and discovered an enormous lie”
What astronaut Ron Garan saw in space changed his life forever – here’s what it taught him.
▸
8 min
—
with
Ron Garan
Videos
The true story behind Carl Sagan’s cult classic, Contact
Do aliens dream about meeting us, too?
▸
with
Jill Tarter
Videos
NASA astronaut explains humanity’s trajectory to Mars
The first human that isn’t an Earthling could be in our lifetime.
▸
5 min
—
with
Robert Curbeam
How Earth’s 23.4° tilt makes life beautiful
Rituals come as much from religion as they do from the way Earth spins around the Sun.
▸
4 min
—
with
Sasha Sagan
Videos
Michio Kaku: “We need a second planet”
Humans won’t survive if we stay on Earth. Michio Kaku explains.
▸
7 min
—
with
Michio Kaku
Up Next
Surprising Science
Where Do Chimps Learn to Use Tools? Ask Mom.
Researchers video chimpanzee mothers teaching their kids how to use tools.