The purpose of a mysterious 3700-year-old Babylonian clay tablet has been discovered by scientists. Researchers from the University of New South Wales (UNSW) in Australia figured out that the tablet contains the world’s oldest and most accurate trigonometric table. What’s also remarkable – the finding rewrites history, establishing that Babylonians invented trigonometry, the study of triangles, more than a 1000 years earlier than Ancient Greeks.

The tablet, known as Plimpton 322, was discovered in the early 1900s on the territory of southern Iraq. Its discoverer, Edgar Banks, is considered one of the inspirations for the adventuring archaeologist character of Indiana Jones. The table is believed to have originated in the ancient Sumerian city of Larsa and is dated somewhere between 1822 and 1762 BC.

The tablet has 15 rows of numbers written in cuneiform over four columns. It uses a base 60 numeral system (called “sexagesimal”), which originated with ancient Sumerians. What was the tablet used for? The scientists think it might have been an invaluable aid in the construction of palaces, temples and canals. Before pocket calculators, trigonometric tables were used widely in a variety of fields. They let you use one known ratio of the sides of a right-angle triangle to figure out the other two unknown ratios.

One of the study’s authors, Dr. Daniel Mansfield from the UNSW School of Mathematics and Statistics, explained why the tablet held such mystery –

“Plimpton 322 has puzzled mathematicians for more than 70 years, since it was realised it contains a special pattern of numbers called Pythagorean triples. The huge mystery, until now, was its purpose – why the ancient scribes carried out the complex task of generating and sorting the numbers on the tablet,” said Mansfield. “Our research reveals that Plimpton 322 describes the shapes of right-angle triangles using a novel kind of trigonometry based on ratios, not angles and circles.” 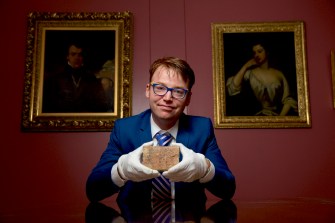 He also called the tablet “a fascinating mathematical work that demonstrates undoubted genius.” Mansfield said the mathematics on the tablet are advanced even for our modern trigonometry. Plimpton 322 also shows the Babylonians proved the famous Pythagorean theorem a thousand years before Greek mathematician Pythagoras was born.

Interestingly, not only is this the world’s oldest trigonometric table, it’s also “the only completely accurate” one because of its reliance on the potentially more precise base 60. Mansfield thinks this approach can actually teach something to the modern math wizards.

“This means it has great relevance for our modern world. Babylonian mathematics may have been out of fashion for more than 3000 years, but it has possible practical applications in surveying, computer graphics and education,” explains Mansfield. This is a rare example of the ancient world teaching us something new,” he says.

“It opens up new possibilities not just for modern mathematics research, but also for mathematics education. With Plimpton 322 we see a simpler, more accurate trigonometry that has clear advantages over our own,”said Dr. Wildberger.“A treasure-trove of Babylonian tablets exists, but only a fraction of them have been studied yet. The mathematical world is only waking up to the fact that this ancient but very sophisticated mathematical culture has much to teach us.”

You can read the new study in Historia Mathematica.

Check out also Dr. Mansfield’s video on the tablet:

“Salvator Mundi” sold for a record-breaking $450 million in 2017, but is it really as valuable as people were led to believe?
13.8

A variety of living and non-living things exhibit behavioral synchronization. Why?
Up Next
Surprising Science

In this radical view, the universe is a giant supercomputer processing particles as bits.