There are an estimated 5,000 people with a range of intellectual disabilities living in 900 places of “shared accommodation” with 24-hour staff support in Victoria, Australia. A pilot study from the Living with Disability Research Centre, in Melbourne, has found that providing regular access to dogs appears to help socialize those living with certain disabilities.

This is important because of already existing literature that says people who live in supported accommodation “have relatively poor outcomes on the quality of life” in terms of social inclusion and interpersonal relationship. Existing literature also notes that, “In an Australian survey, 58 percent of pet owners indicated they had got to know people and made friends through having pets.”

But not everyone has the time and resources to devote to owning a dog, so the researchers observed a visiting dog walking program, which was run in collaboration with two qualified and experienced dog handlers from a national non-profit organization. Participants in the study visited cafés, shops, the local park, and made their way around the community. They’d typically pursue the same activity each outing, sometimes varying the location. 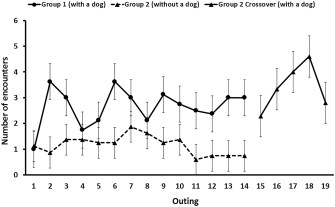 Average (and standard deviations) number of encounters each outing for participants in Group 1 (with a dog) and Group 2 (without a dog; with a dog).

The results strongly suggest that, when dogs are present, people have more social encounters. It’s a finding that’s emphasized all the more by the subjective observations of the animal handlers:

“I am noticing an interesting pattern in the outings where there is no dog present. Only shop attendants initiate conversation. Some say ‘Hello’ to me, but they try not to look at the person with the disability.”

If loneliness has a degree of impact on our health, then it’s incumbent on us to try and take steps to socialize the most vulnerable.

Back to the drawing board.
Up Next
The Future

A tool that can slowly build a better world.