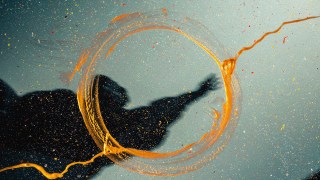 Why science must embrace imagination, intuition, and evidence

All science begins with a leap of intuition, says Richard Dawkins, but we can only ever find objective truths by knowing when to let evidence take over from emotion.
▸
4 min
—
with
Richard Dawkins

You can be committed to science, but as soon as you’re committed to a hypothesis, you’ve walked off the trail of objective truth, says Richard Dawkins. For him, that is the mission of science and the purpose of the scientific method: these truths exist—they are the foundations of innovations like vaccinations, antibiotics, and space travel, because they are built on something solid: evidence. Einstein is known for highly valuing the role of imagination in science, and Dawkins agrees: imagination and intuition are the springboards scientific progress depends on—but when evidence refutes a hypothesis or a feeling, that’s the end of the line. Dogged persistence doesn’t get you any closer to the truth, says Dawkins, only critical thinking can do that. Richard Dawkins’ latest book is Science In The Soul: Selected Writings of a Passionate Rationalist.

Richard Dawkins: The first chapter of 'Science in the Soul' is called 'The Values of Science and the Science of Values'. And it does, of course, give prominence to objective truth. There is a kind of whispering campaign—more than a whispering campaign, sometimes a yelling campaign—against the value of objective truth. Science, I think, is committed to objective truth; we’re committed to the view that truth is independent of the cultural background of the scientist, for example. So as I said in the book, an experiment done in a lab in New York can be replicated in a lab in New Delhi, and if it’s all done correctly in the same way they’ll get the same result. Science’s belief in objective truth works. Engineering technology based upon the science of objective through achieves results: it manages to build planes that get off the ground, it manages to send people to the moon and explore Mars with robots, and land robotic vehicles on comets. Science works. Science produces antibiotics, it produces vaccines that work. So anybody who chooses to say, “Oh, there’s no such thing as objective truth, it’s all subjective, it’s all socially constructed,” tell that to a doctor, tell that to a space scientist.

Manifestly, science works and the view that “there is no such thing as objective truth” doesn’t. Science proceeds, I believe, in the sort of Popperian view that science proceeds by intuitive leaps of the imagination, building an idea of what might be true and then testing it by experiment, by observation, in the second phase. It’s a kind of Darwinian selection of mutation, which is provided by the imagination.

So intuition is very important, but it is important that scientists should not be so wedded to their intuition that they omit the very important testing phase, and if their hypothesis is disproved they should regard that as a reason to reject the hypothesis or modify it, not a reason to just carry on doggedly sticking to the hypothesis because they are intuitively committed to it.
The phrase 'critical thinking' is quite a cliché but it is immensely important. And so I think that I really could sum it up by saying what we need is critical thinking; we need to respect evidence, we need to respect the fact that the only reason to believe anything about the real world is evidence. The evidence must be assessed critically, preferably statistically and logically. You cannot derive truths about the real world by intuition alone, by feelings alone, by what feels good.

People who say things like, “All opinions are equally valid,” or, “Well, it’s true for me, it may not be true for you.” Never tolerate that kind of thing. The only reason to believe anything is true is that there’s evidence, and everybody should either look at the evidence for themselves or they should trust that the person they’re talking to has looked at the evidence in a scientific, logical, rational, critical way.

Just for example, I’m not qualified to assess the evidence of modern physics experiments, I’m just not qualified. So I have to trust—this is not trusting authority so much as trusting the scientific method, which I know has been used by physicists whom I can’t directly assess, it has been used by physicists who are using the same techniques as I know work in my own field of biology.

Hope Together: How One Partner’s Belief in Good Outcomes Affects the Relationship