Proving that there’s still so much to be understood about the human body, scientists have discovered a new organ – a part of our digestive system called “mesentery”.

It was previously regarded as a series of separate structures and was only recently proven to be a whole continuous organ.

The four-year research that concluded that mesentery was indeed an organ was led by J Calvin Coffey, a professor of surgery at the University of Limerick. The results of the study are published in The Lancet Gastroenterology & Hepatology.

“In the paper, which has been peer reviewed and assessed, we are now saying we have an organ in the body which hasn’t been acknowledged as such to date,” said Professor Coffey. “The anatomic description that had been laid down over 100 years of anatomy was incorrect. This organ is far from fragmented and complex. It is simply one continuous structure,” he further elaborated.

What does it look like? It’s a double fold of peritoneum, the lining attaching our intestine to the wall of the abdomen. It was actually described even by Leonardo da Vinci but was generally neglected by doctors as it wasn’t regarded an organ. 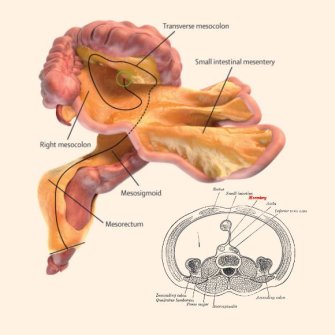 What the mesentery does is not entirely clear at this point. In fact, scientists aren’t even sure which of the body’s systems it belongs to, with the paper saying: “Whether the mesentery should be viewed as part of the intestinal, vascular, endocrine, cardiovascular, or immunological systems is so far unclear, as it has important roles in them all.”

Studying the mesentery might prove key in treating abdominal and digestive diseases.

“When we approach it like every other organ…we can categorise abdominal disease in terms of this organ,” explained professor Coffey.

In fact, the professor thinks a whole new field of mesentery science is necessary – like gastroenterology and neurology.

“This is relevant universally as it affects all of us. Up to now there was no such field as mesenteric science. Now we have established anatomy and the structure. The next step is the function. If you understand the function you can identify abnormal function, and then you have disease. Put them all together and you have the field of mesenteric science…the basis for a whole new area of science,” he said.

The new organ has already been accepted as such by the medical community with students around the world now learning of the mesentery as a continuous organ. The new research also prompted an update in the famed medical textbook “Gray’s Anatomy”.

Caffeine does something, but it’s not clear exactly what.
Health

A new class of antidepressant works in 2 hours

The potential new drug is in a class of its own, as it works differently than any other antidepressant on the market.
Up Next
Culture & Religion

Is It Rational to Have Virtuous New Years’ Resolutions?

Here’s what we need to remember about the history and logic of “cardinal virtues.”