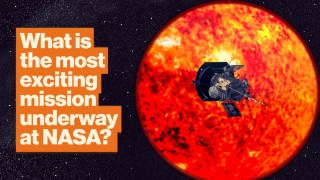 Why the Parker Solar Probe is NASA’s most exciting mission

Michelle Thaller: One of the most exciting things that's going on at NASA right now is that we have a probe that's actually orbiting very close to the sun. And over the next years, it's going to get closer, and closer, and closer. It's called the Parker Solar Probe, and the catch phrase, sort of the mission motto is, a mission to touch the sun. And that sounds incredibly dramatic. I should probably quantify that a bit. We're not actually touching the surface of the Sun, but the Sun has an atmosphere of gas around it, almost like the Earth has an atmosphere. It's called the corona. And the corona extends many millions of miles away from the surface of the Sun. Parker Solar Probe is actually going to fly through the Corona, getting into a fairly close part.

Over the next seven years, it's going to orbit around 24 times. And each time, it's going to get a little bit closer to the Sun. And in order to survive that, in order to have enough speed to actually escape the Sun's gravity and come out again, it's going to go faster and faster all the time as well. So at its fastest-- in a few years from now-- the Parker Solar Probe will be going nearly 400,000 miles an hour as it loops around the sun and then comes right back out again. That's by far the fastest speed that any human-made spacecraft has ever attained. And that's going to be very exciting. So each perihelion is a little closer and a little faster, and then the orbit takes it out close to the planet Venus. And the planet Venus actually-- interestingly enough-- it helps Parker lose energy. In order to get closer and closer to the Sun, Parker has to lose some of its own rotational energy. And when it loses energy, it can drop in a little closer all the time. So over the next years, you're going to see our spacecraft get a little closer each time and go a little faster each time it goes around the Sun.

Now, what are we looking for? Why are we actually flying a spacecraft this close to the Sun? Well, the corona, the atmosphere around the sun, is actually one of the biggest mysteries in our solar system. It's extremely hot. The gas around the Sun is millions of degrees. And that's rather strange because the surface of the Sun itself is only about 10,000 degrees. So how can the gas above the surface be that much hotter than the surface itself? Kind of the analogy we use at NASA is picture yourself around a campfire at night and you're enjoying the warmth of the campfire, but then as you walk away from the fire, it becomes hotter and hotter as you go away and burns you to a crisp five miles out. That doesn't work. It's a very strange way of thinking about temperature. So something's going on with the corona. It may have to do with the Sun's complex magnetic field. Maybe the magnetic field is shooting particles up into it. It may have to do with shock waves, even the Sun vibrating and actually giving energy to the gas above it. There's many different ideas and theories as to why the corona is so hot. But right now, we don't have a great way to tell which is right and which isn't. So when we're there and actually measuring how fast the particles are going, the different particles you find, how dense or how rarified that gas is around the sun, we'll have a much better idea which of those theories are true.

The Parker Solar Probe to me is also a marvel of modern engineering. I mean, think about how are you going to get a spacecraft that close to the Sun, and have it survive and not burn up. Well, the whole spaceship is protected by a heat shield. The heat shield itself is not very thick. It's actually only about six inches thick. And it's made of a carbon composite material with a very shiny reflective aluminum coating on top. Incredibly, that heat shield is still going to get up to about 2,500 degrees Fahrenheit. So it's going to get very, very hot, but that will protect the rest of the spacecraft from the radiation coming from the Sun. And the angle has to be just right. You always have to have the heat shield right in between the Sun and the rest of the spacecraft. The rest of the spacecraft has to be in its shadow, or it will fry. And we actually can't send commands up to Parker often enough to make sure it's exactly lined up. So Parker is a very autonomous spacecraft. It's constantly detecting what its angle is relative to the Sun and correcting that. So in some ways, it's one of the most autonomous spacecraft yet launched.

One of the things I think is kind of funny about the design is it does use solar power-- that makes sense-- you're very close to the Sun. But it has these really, really dinky little solar panels off to the side because when you get close to the sun, you don't need big solar panels. So at the end of Parker Solar Probe's mission, we will have this thing orbiting closer to the sun than we've ever been before, going faster than we ever have before. And maybe we'll finally have some idea why this corona, this mysterious million-degree gas around the Sun can possibly be that hot.

Big Think+: A new way to get smarter, faster