Living in the most technologically and scientifically-minded society to date, many of us, reasonable people, still can’t help but succumb to superstitions in our daily lives. That’s just how our brains help us cope. This would be a strange world indeed if black cats really gained control over your destiny simply by crossing the road in front of you. Still, many would try to find a way around if a black cat showed up in their path. Just in case.

To understand better what superstitions still hold sway over the minds of Americans, researchers surveyed over 2,000 people and found that about 40% would consider themselves “superstitious”.

The top superstition? Knocking on wood. Something harder and harder to do in a modern home.  Apparently, 32.3% do this.

If you are curious, this practice to avoid bad luck has its root in pagan traditions, where various cultures believed helpful spirits resided inside certain trees. So if you touched that tree, you’d be asking the spirit for protection. 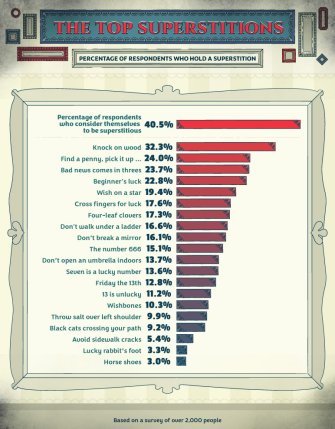 Other top superstitions involved wishing on stars, crossing fingers for luck and seeking out four-leaf clovers. Interestingly, some of the bad omens relate to numerology, with 3, 666, and 13 being particularly worrisome.

Black cats are a potential hazard to 9.2% of the surveyed group, but we know the real number is much higher.

If you look at the results from a gender-based perspective, men come out more for believing in “beginner’s luck” while women are more likely to wish on a star. Both groups knock on wood with nearly the same conviction. 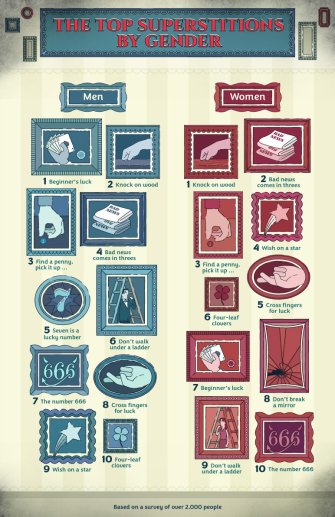 Breaking it down by age groups, millennials are more likely to believe in luck, while generation Xers apparently are the most superstitious, with 10 different superstitions scoring high in the results. To the baby boomers, number 13 is of distinct concern. 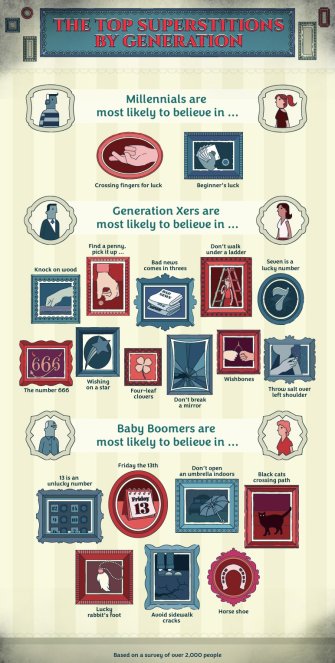 As far as which part of the country is most superstitious, the honor goes to the South. Still, it’s easy to see that, overall, the numbers between the regions are fairly similar, with the west being least populated by people worried about throwing salt over their left shoulders. 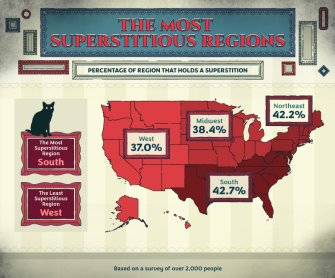 The study was conducted by Casino.org.

Tags
knock on woodluckmillennialreligionsciencestudysuperstitionunited states
In this article
knock on woodluckmillennialreligionsciencestudysuperstitionunited states
Related
The Well
Can we condition ourselves to be heroes?
Neuroscientist Robert Sapolsky on the science of temptation, and the limitations of your brain’s frontal cortex.
▸
6 min
—
with
Robert M Sapolsky
High Culture
Why are flood myths so common in stories from ancient cultures around the world?
Could the prevalence of flood myths around the world tell us something about early human migration or even the way our brains work?
The Future
Space travel will radically change human psychology and spirituality
We are traveling in a realm that once exclusively belonged to the gods. Space travel will force humanity to rethink everything.
The Past
How the death of alchemy gave birth to modern science
Far from practicing witchcraft, the experimentation of medieval alchemists helped bring about the Scientific Revolution.
Thinking
Finding your essential self: the ancient philosophy of Zhuangzi explained
Adopting a healthy scepticism towards inherited ideas means “emptying the container of the Self.”
Up Next
Surprising Science
C-Sections May be Altering the Course of Human Evolution
In some countries at least, the “obstetrical dilemma” has been solved by modern medicine.