Solidity is a function of magnification. We know that anything we experience as solid is actually a structure of atoms packed closely enough that to our eyes they appear to be a single solid thing. If we were small enough, we’d see the spaces between them; if we were even smaller, those spaces might seem vast. Likewise, in 1989 Margaret Geller and John Huchra, analyzing redraft survey data, discovered the immense “Great Wall,” a “sheet” formed from galaxies many light years apart. That first large-scale structure is 500 million light-years long, 200 million light years wide, and with a thickness of 15 million light years.

Other gigantic large-scale structures been discovered since — sheets, filaments, and knots, with bubble-like voids intersperse among them. They appear to be connected by clouds and filaments of hydrogen gas and dark matter. Though the bodies that comprise the structures are not gravitationally bound to each other — the distances between them are too great — evidence is piling up that they are linked by something.

Recent observations indicate that galaxies far, far apart are somehow synchronously moving. Something appears to be binding large-scale structures, many light years apart, together after all. Is the currently accepted view of the universe as various clumps of material simply expanding outward from the Big Bang and gravitationally pulling on each other wrong?

The large-scale structures revealed in one segment of sky

The existence and mechanics of large-scale structures are a tantalizing puzzle with obviously major implications for our understanding of the universe. As Noam Libeskind, of the Leibniz-Institut for Astrophysics (AIP) in Germany tells VICE, “That’s actually the reason why everybody is always studying these large-scale structures. It’s a way of probing and constraining the laws of gravity and the nature of matter, dark matter, dark energy, and the universe.”

The identification and study of large-scale structures is a product of analyzing and modeling simulations of redshift survey for specific regions of the sky that visually reveal these immense structures. 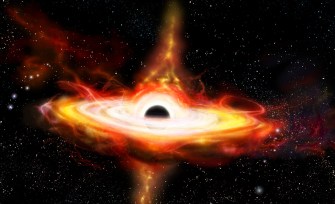 Several pieces of research are causing interest in these large-scale structures to heat up. The most mind-blowingly distant synchronized motion was reported in 2014, when the rotation axes of 19 super-massive black holes at the centers of quasars — out of 100 quasars studied — were found to be in alignment, billions of light years apart. According to the study’s lead author, astronomer Damien Hutsemékers of the University of Liège in Belgium, “Galaxy spin axes are known to align with large-scale structures such as cosmic filaments but this occurs on smaller scales. However, there is currently no explanation why the axes of quasars are aligned with the axis of the large group in which they are embedded.”

The first word of the research paper’s title, “Spooky Alignment of Quasars Across Billions of Light-years,” invokes cosmic-scale quantum entanglement as a possible explanation.

Galaxies of a feather

Astronomer Joon Hyeop Lee of the Korea Astronomy and Space Institute is the lead author of “Mysterious Coherence in Several-megaparsec Scales between Galaxy Rotation and Neighbor Motion,” published in October of this year in Astrophysical Journal. Comparing data from two catalogs of redshift survey data — the Calar Alto Legacy Integral Field Area (CALIFA) and NASA-Sloan Atlas (NSA) catalogs — the researchers’ analysis of 445 galaxies revealed, surprisingly, that galaxies six meparsecs, or 20 million light years, apart were moving in the same way. Those observed, for example, a galaxy moving toward the Earth was mirrored by other distant galaxies moving in the same direction.

“This discovery is quite new and unexpected,” according to Lee, “I have never seen any previous report of observations or any prediction from numerical simulations, exactly related to this phenomenon.”

Since the galaxies are too distant for their gravitational fields to be influencing each other, Lee poses another explanation: That the linked galaxies are both embedded within the same, large-scale structure.

Another puzzle suggesting the influence of large-scale structures has become clear over recent years. It’s been observed that galaxies surrounding our own Milky Way are weirdly arranged in a single, flat plane. Big-Bang thinking would suggest that they should be circling us at all different sorts of angles. Obviously, for adherents of that way of viewing the galaxy — known as the ΛCDM model — this at the very least a troubling anomaly.

The hope that it was an anomaly weakened with the discovery of the same thing occurring around the Andromeda galaxy, and then again around Centaurus A in 2015. By the time “A whirling plane of satellite galaxies around Centaurus A challenges cold dark matter cosmology” was published in 2018, the phenomenon was starting to seem quite common, and possibly universal. The idea that the satellite galaxies might part of a large-scale structure had become even worthier of serious consideration.

As more astronomers embrace the notion of large-scale structures and related research accelerates, we can only hope that these perplexingly oddball movements and associations are eventually made clear. Certainly, imagining a vast arrangement of utterly gigantic structures in which galaxies are embedded paints a very different picture of the universe, and one that makes one wonder if these structures are themselves embedded in something even larger. In this mid-boggling case, we are indeed small enough to see only the space between objects — in this case galaxies. We’ve been no more aware of them than whatever it is that may be living between our own atoms.

Humans won’t survive if we stay on Earth. Michio Kaku explains.
▸
7 min
—
with
Michio Kaku
Up Next
Life

Scientists speculate that if life were to have spontaneously developed on Earth, the first thing there would need to be are vesicles.