How cold was the Ice Age? While one can imagine layers of ice covering everything around the world, that’s not exactly what happened. In fact, researchers identified the temperature of the Last Glacial Maximum, from about 20,000 ago, to be about 46 degrees Fahrenheit (7.8 C).

This, of course, was the average global temperature – not the extent of how cold it really got in some places. The Last Glacial Maximum (LGM) was a very chilly period, when glaciers covered about half of North and South Americas, as well as Europe and parts of Asia. Overall, the new paper found that the world’s temperatures were about 11 degrees Fahrenheit or 6 degrees Celsius less warm than today. If you’re comparing, the average global temperature was 14 C (57 F) in the 20th century.

The study’s lead author, Jessica Tierney, associate professor at the University of Arizona Department of Geosciences, addressed that this may not sound like a big deal to some but was, in fact, monumental.

“In your own personal experience that might not sound like a big difference, but, in fact, it’s a huge change,” explained Tierney. “In North America and Europe, the most northern parts were covered in ice and were extremely cold. Even here in Arizona, there was big cooling. But the biggest cooling was in high latitudes, such as the Arctic, where it was about 14 C (25 F) colder than today.”

This corresponds to climate change models, which show that high latitudes get warmer at a faster rate than low latitudes. This means, according to projections, that this process of “polar amplification” will make it warmer and warmer over areas like the Arctic which are more sensitive to climate change. 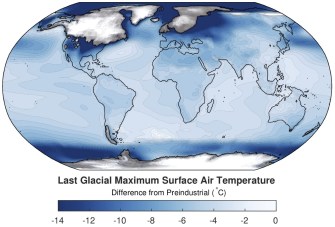 How did the scientists reach their conclusions? The team used models that connected data from ocean plankton fossils to sea-surface temperatures. A technique called data assimilation, used in weather forecasting, was then employed to link the fossil data with climate model simulations of the LGM.

“What happens in a weather office is they measure the temperature, pressure, humidity and use these measurements to update a forecasting model and predict the weather,” Tierney shared. “Here, we use the Boulder, Colorado-based National Center for Atmospheric Research climate model to produce a hindcast of the LGM, and then we update this hindcast with the actual data to predict what the climate was like.”

The findings will help climate scientists evaluate how today’s rising atmospheric levels of carbon dioxide influence the average temperatures around the world.

Co-authors of the new study also include professor Christopher Poulsen from the University of Michigan and postdoctoral researcher Jiang Zhu, now with the National Center for Atmospheric Research.

“Six degrees of global average cooling is enormous. The world would have looked much different during the last glacial maximum,” said Poulsen, adding “The northern portions of North America, including here in Ann Arbor, Michigan, were covered by kilometers of ice.”

You can read their paper published in Nature.

A forensics expert explains what’s involved with documenting human rights violations during conflicts, from Afghanistan to Ukraine.
Up Next
Starts With A Bang

How Probability Misleads Us About The Universe

The hot and cold spots from the hemispheres of the sky, as they appear in the CMB. This encodes a tremendous amount of information about the early Universe. We expect […]