On Earth Day, April 22, millions of people plan to hit the streets of Washington, D.C. and cities worldwide to March for Science.

The organizers of the march frame it as a reproach against “an alarming trend toward discrediting scientific consensus and restricting scientific discovery.” Lead organizer Jonathan Berman, a postdoctoral fellow at the University of Texas Health Science Center at San Antonio, described it like this to the New York Times:

“Yes, this is a protest, but it’s not a political protest… The people making decisions are in Washington, and they are the people we are trying to reach with the message: You should listen to evidence.”

Speaking to Buzzfeed News, Bill Nye, one of several public leaders for the march, said:

“People are denying the facts of science in the world’s most influential economy. We’re marching to remind everybody of how much science serves you, a person, as a citizen in our society.”

But despite the good intentions of organizers, some scientists are questioning whether the march will do more harm than good.

A lack of consensus

The March for Science got off to a rocky start, and almost all the bad noise came from within the scientific community itself. Soon after the march was announced in January, an organizer sent out a tweet that some scientists considered overtly political.

Harvard psychologist Steven Pinker responded with a tweet that said the march “compromises its goals with anti-science PC/identity politics/hard-left rhetoric.” Organizers soon deleted the tweet, issued an apology, and revised their mission statement, though they never mentioned Pinker.

“I was pretty appalled,” said evolutionary biologist Jerry Coyne to the New Republic. “Their mission statement was like, all the buzzwords of the regressive left. It wasn’t a march about science, it was a march about identity politics. And at that point, I couldn’t support it.”

Meanwhile, other scientists criticized the march for failing to be inclusive. After it was announced that Bill Nye would be the march’s first honorary co-chair, complaints arose about how organizers weren’t committed to diversity.

“I love Bill Nye,” said Stephani Page, a biophysicist at University of North Carolina who was invited to join the march’s board in February after she criticized its approach to diversity, to BuzzFeed News. “But I do feel comfortable saying to you what I said to the steering committee: He is a white male, and in that way he does represent the status quo of science, of what it is to be a scientist.”

Regardless of questions of inclusivity, some scientists think the march is a bad idea simply because it will be perceived as a noisy political protest by the same people it seeks to reach — especially in the wake of the women’s march. 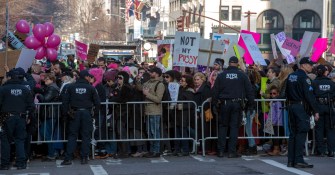 Robert S. Young, a coastal geologist, wrote an op-ed for the New York Times explaining why he thinks the march is a bad idea:

“A march by scientists, while well intentioned, will serve only to trivialize and politicize the science we care so much about, turn scientists into another group caught up in the culture wars and further drive the wedge between scientists and a certain segment of the American electorate.”

James Gates, a physicist at the University of Maryland who served on Obama’s Presidential Council of Science Advisors, told PBS that the march will likely be a futile display of outrage.

“No one has enunciated to me what the theory of action is behind the March for Science. It’s obviously a way for people to express their frustration, but I would posit that an emotional reaction is perhaps not the best way to proceed.

One of the best things my life in science has taught me is that you deliberate and think about the consequences of actions. I know that a lot of people are fervent in their desire to express their outrage, but an expression of outrage is not a plan.”

Instead of marching on Washington, Young suggests scientists start dialogues in their communities.

“Make contact with that part of America that doesn’t know any scientists. Put a face on the debate. Help them understand what we do, and how we do it. Give them your email, or better yet, your phone number…

The solution here is not mass spectacle, but an increased effort to communicate directly with those who do not understand the degree to which the changing climate is already affecting their lives. We need storytellers, not marchers.” 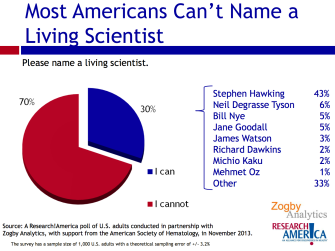 Support from the scientific community

Despite the criticisms, the march has the support of many of the nation’s top science organizations, like the New York Academy of Sciences, the American Anthropological Association, and the American Association for the Advancement of Science (AAAS). Rush Holt, CEO of AAAS, said it’s collaborating with other groups in the community to make the march a success.

“We see the activities collectively known as the march as a unique opportunity to communicate the importance, value, and beauty of science.”

Other supporters hope the March for Science will shed some light on the important research and scientists that often go unrecognized. If nothing else, the march has reinvigorated a broader conversation about what role scientists should play in politics.

Some think scientists should steer clear of politics, or that science can’t answer moral questions. Philosopher David Hume famously said that an “ought” can’t be derived from an “is”, meaning it’s not immediately clear how we can use facts about the world to make moral judgments.

Still, those organizing the march think it’s time for action.

“We face a possible future where people not only ignore scientific evidence, but seek to eliminate it entirely. Staying silent is a luxury that we can no longer afford. We must stand together and support science.”

Tags
anti-sciencebill nyeclimate changeEPAmarch for scienceProtestsciencesteven pinkertrumpWashington
In this article
anti-sciencebill nyeclimate changeEPAmarch for scienceProtestsciencesteven pinkertrumpWashington
Related
The Well
The 3 “demons” that haunted legendary scientists
Darwin, Descartes, and Maxwell all believed in these science ‘demons.’
▸
7 min
—
with
Jimena Canales
Harvard professor debunks the biggest exercise myths
Exercise culture is crazy. But what you need to do is exceedingly simple.
▸
with
Daniel Lieberman
Videos
NASA astronaut explains humanity’s trajectory to Mars
The first human that isn’t an Earthling could be in our lifetime.
▸
5 min
—
with
Robert Curbeam
Videos
Are you developing Alzheimer’s?
Only 2% of Alzheimer’s is 100% genetic. The rest is up to your daily habits.
▸
9 min
—
with
Lisa Genova
Videos
Michio Kaku: “We need a second planet”
Humans won’t survive if we stay on Earth. Michio Kaku explains.
▸
7 min
—
with
Michio Kaku
Up Next
Culture & Religion
What Are Testosterone Boosters Actually Boosting?
The cognitive boost of taking testosterone supplements has not been substantiated — but let’s face it, most men aren’t seeking a better memory when popping testosterone pills.