Sometimes, as a scientist, you forget how much you take for granted about the amazingness of the universe. The other day, my colleagues and I traded stories about how non-scientist friends would often ask us questions that we don’t even realize are questions. One of my compatriots related how a friend had been completely amazed that the sun was just another star. I really loved that story because, when you think about it, humans have only figured out what stars are — and that the sun is a star — very recently in our 300,000-year history.

So let’s step back and ask that basic question: How do we know the sun is a star?

Of course, the sun is a light in the sky, and stars are lights in the sky. But for someone starting from scratch, they might seem really different. The sun is only “up” in the day, but the stars are only up in the night. The sun can be so hot that it literally burns your skin. Stars, on the other hand, give off no warmth at all. How did astronomers see that the sun and the stars were beasts of the same feather?

One key point was understanding that their energy output per time (what astronomers call luminosity) is similar. If stars look dim while the sun appears blinding, it’s just because the sun is much closer. The luminosity of an object can be found by knowing how bright it appears to be and its distance. That means once you know the distance to an object, you can calculate its luminosity. The problem, then, of determining if the sun and stars had similar luminosities really came down to figuring out their distances. Clever people as far back as the ancient Greeks started estimating how far away the sun was, but distance measurements to the stars took humanity a lot longer.

The problem of parallax 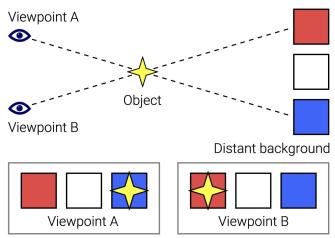 The problem for the stars was the method required for calculating distances. The easiest way is what’s called parallax, which relies on how a distant object shifts its position relative to a nearby object when you, the observer, shift position. You can see the effect by putting your finger up against your nose, looking at a picture on a wall, and then closing one eye and then the other. The position of your finger relative to the picture on the wall jumps back and forth as you do this.

But here’s the catch. The farther away the picture on the wall, the smaller the shift in its position. Since stars are so far away, astronomers had to wait until they had reasonably powerful telescopes before they could get accurate parallax measurements and, hence, accurate distances. Once these were determined, they found that, yes, the sun and the stars pump out comparable amounts of energy every second.

It’s worth noting that big stars can be millions of times brighter than small stars, but for our purposes here, what matters is that astronomers were able to determine that stars and the sun were in the same category of “luminous stuff.”

We are all star stuff

The next big step in showing that the sun was a star was to show that both were basically made of the same stuff. People had long imagined the sun to be made of burning stuff for obvious reasons, but what kind of stuff? Was it wood, candle wax, or coal? And what about the stars that seemed to burn so less intensely?

The barcode of the sun.Credit: NOAO / AURA / NSF

The answer to this question came with the invention of spectroscopy, which involves sending sunlight or starlight through a prism to break it up into its component colors (like a rainbow). When astronomers did this with powerful enough spectrographs, they saw that the rainbow was not complete. There were dark bands or missing colors as if something had eaten the light at specific wavelengths. The dark lines were not random but appeared in specific patterns. Remarkably, physicists soon found that these patterns of dark lines were like the fingerprints of specific elements (such as hydrogen, helium, nitrogen, and oxygen) in the gas that the light passed through on the way to the spectrograph.

This discovery was the true game changer. With spectroscopy, astronomy became astrophysics, and soon a true science of stars began. In the decades that followed, astronomers would unpack the secrets of the inner architecture of stars, as well as the nuclear energy source that powers their titanic engines.

Through all these steps, the sun was finally recognized as just another star in the late 19th or early 20th century. It was our parent ball of nuclear fusion — neither different nor unusual compared to other stars, but, to us, very special.

Far from acting as the conduits of a benevolent deity, these religious leaders threw the teachings of their own church out of the window.
Up Next
Neuropsych

The treatment is here, but are we ready?