Space isn’t as spacious as it should be; it’s full of space debris, small amounts of scrap, trash, and machinery that humans have abandoned to Earth’s orbit. The ISS has cataloged about 500,000 of these small pieces and they hurtle around our planet at about 15,000mph. Or 14.17 g-force. Or 24,140kph. 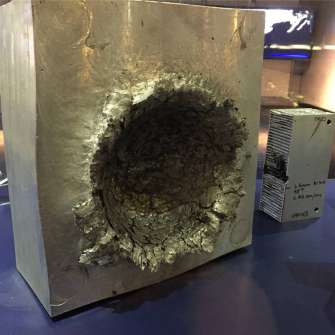 Pretty scary, huh? It should be noted that although this looks enormous, the crater is about 5 inches deep. Having said that, it’s caused by something about the size and weight of an eraser on the end of a pencil.

The ISS (International Space Station) is about the size of a football field, and thus an easy target for space debris. To solve this, it has to move its orbit to make sure it doesn’t get hit. Every once in a while, the ISS gets hit by pieces the size of a paint chip and the crew need to repair the ship for weeks.

What’s that? Do you want another interesting space debris fact? Well, during the height of the Cold War in 1965-1967, the U.S. fired hundreds of thousands of tiny needles into space to try for what could best be described as high-powered radio signals. This, however, didn’t work nearly as well as planned and the needles just clumped together into groups — turning these needles into high-velocity projectiles. Fifty years later, there are about 38 of these clumps still in orbit, although sometimes they enter Earth’s atmosphere and burn up.

Galaxies can die if their star-making stuff is lost. But now it can find its way back.
Up Next
Politics & Current Affairs

The trouble with Marx

What happens when a good philosopher fudges the facts to promote his politics?