Scientists now believe that a fossilized relative of the modern millipede discovered in Scotland represents the earliest evidence of an animal living on land.

This terrestrial trailblazer that lived roughly 425 million years ago led the way for assemblages of land creatures that would come to dominate Earth.

One idea about how life began on Earth theorizes that it began in bodies of water. The cocktail of gases in the atmosphere mixed with lightning strikes is thought to have allowed monomers such as amino acids to spontaneously form in the oceans. This is known as the “primordial soup” theory. Out of this life-creating stew, bugs known as arthropods (which includes insects, spiders, crustaceans, and centipedes) are thought to have been some of the very first animals to venture onto land.

There’s indirect soil-based evidence that other insects like soil worms crawled on land before the myriapods. However, the evidence may only indicate fleeting trips to the land above water. Myriapods, we know, made land their permanent home. The fossil of the ancient millipede-like creature, Kampecaris obanensis, was first discovered in 1899 on the Scottish isle of Kerrera. Now, it’s been radiometrically dated to 425 million years ago. That would make these multi-legged critters the oldest land animal ever to have lived out of water. (At least, that we know of.) Their pioneering journey out of the sea set forth an explosive multiplication of new terrestrial life forms. Just 20 million years after Kampecaris made the move to land, the fossil record shows a plethora of bug deposits. Fast-forward another 20 million years and there is evidence that spiders, insects, and tall trees were thriving in ancient forest communities.

“It’s a big jump from these tiny guys to very complex forest communities, and in the scheme of things, it didn’t take that long,” said geoscientist Michael Brookfield from the University of Texas and the University of Massachusetts in Boston, in a press release. “It seems to be a rapid radiation of evolution from these mountain valleys, down to the lowlands, and then worldwide after that.”

We can’t be sure that Kampecaris is actually the very first creature to have lived on land, as it’s possible that there are older undiscovered fossils of both plants and bugs. However, no earlier findings have been made despite the fact that researchers have been investigating some of the most well-preserved fossils from this era. The team thinks this may indicate that they have reached the end of the land fossil record and that this ancient millipede represents the vital turning point at which life moved onto land.

According to this new study, Kampecaris is about 75 million years younger than the age other scientists have estimated the oldest millipede to be using a technique known as molecular clock dating, which is based on DNA’s mutation rate. Similarly, fossils of stemmed plants in Scotland have also been evaluated as being roughly 75 million years younger than researchers once thought. So, if this ancient critter really was the first bug to blaze the trail onto Earth, then scientists have been greatly underestimating how rapidly bugs and plants evolved to transition to life on land.

“Who is right, us or them?” study co-author Elizabeth Catlos said. “We’re setting up testable hypotheses – and this is where we are at in the research right now.” 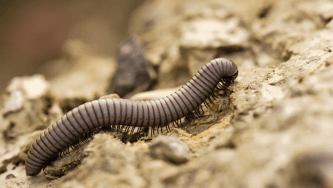 Despite the potentially huge evolutionary significance of Kampecaris, this was the first study to address the fossil’s age. One reason for that could be the challenge of extracting zircons (a microscopic mineral necessary to accurately date fossils) from the ashy rock sediment in which the fossil was preserved. Extraction requires impeccable vision and a flawlessly steady hand, as the zircons can easily be flushed away by accident. There’s almost no room to err.

One of the co-authors of the study, geoscientist Stephanie Suarez, has been mastering the technique for separating the zircon grain from sediment since her time as an undergraduate student.

“That kind of work trained me for the work that I do here in Houston,” Suarez said. “It’s delicate work.”

As an undergrad, Suarez used the technique to find that a different millipede specimen that was once thought to be the oldest bug specimen was actually 14 million years younger than estimated. Her technique now passes the Oldest Bug To Walk The Earth title onto a new species; Kampecaris.

The study was published in Historical Biology.

What was this mammoth tusk doing on the ocean floor 150 miles from land?
The Past

Bears, chimps, or humans? A track of five poorly preserved footsteps at Laetoli has puzzled paleontologists for decades. Now, a research paper from Nature claims to have solved the mystery.
Life

Purely physical and chemical processes can deceive us into thinking that life is present, when it actually is not.
Up Next
The Present