Humanity could be making its way through the Solar System much faster thanks to the discovery of a new superhighway network among space manifolds. Don’t get your engines roaring along this “celestial autobahn” just yet, but the researchers believe the new pathways can eventually be used by spacecraft to get to the outer reaches of our Solar System with relative haste.

The celestial highway could get comets and asteroids from Jupiter to Neptune in less than a decade. Compare that to hundreds of thousands or even millions of years it might ordinarily take for space objects to traverse the Solar System. In a century of travel along the new routes, a 100 astronomical units could be covered, project the scientists. For reference, an astronomical unit is the average distance from the Earth to the Sun or about 93 million miles.

The international research team included Nataša Todorović, Di Wu, and Aaron Rosengren from the Belgrade Astronomical Observatory in Serbia, the University of Arizona, and UC San Diego. Their new paper proposes a dynamic route, going along connected series of arches within so-called space manifolds. These structures, coming into existence from gravitational effects between the Sun and the planets, stretch from the asteroid belt to past Uranus.

The most pronounced of these structures are linked to Jupiter by its strong gravitational pull, explained UC San Diego’s press release. They influence the comets around the gas giant as well as smaller space objects called “centaurs,” with are like asteroids in size but exhibit the composition of comets.

“Space manifolds act as the boundaries of dynamical channels enabling fast transportation into the inner- and outermost reaches of the Solar System,” write the researchers. “Besides being an important element in spacecraft navigation and mission design, these manifolds can also explain the apparent erratic nature of comets and their eventual demise.” 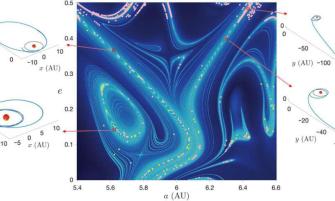 A closer image of the manifolds showing colliding and escaping objects.Credit: Science Advances

The researchers discovered the structures by analyzing collected numerical data on the millions of orbits in the Solar System. The scientists figured out how these orbits were contained within known space manifolds. To detect the presences and structure of the space manifolds, the team employed the fast Lyapunov indicator (FLI), used to detect chaos. The scientists ran simulations to compute how the trajectories of particles approaching different planets like Jupiter, Uranus and Neptune would be affected by possible collisions and the manifolds.

While the results are encouraging, the next step is to figure out how these arches can be used by spacecraft for much speedier travel. It’s also not clear how similar manifolds work near Earth. Also unclear is how they impact our planet’s run-ins with asteroids and meteorites or any of the man-made objects floating up in space near us.

Check out the new paper “The arches of chaos in the Solar System” in Science Advances.

Study: Militarization of police does not reduce crime