Elon Musk continues to make splashy news, with his company SpaceX announcing that it is planning to send two private citizens on a circumlunar mission by the end of next year. The 2018 trip would mark humanity’s return to the moon after over 40 years and will last about 5 days.

The journey would involve flying past the moon, just above its surface, reaching as far as 400,000 miles away from Earth, going into deep space until gravity finally turns the spacecraft around, bringing it back to our planet. This would be the farthest in space humans have ever been, as the current record is 248,655 miles away, set by the Apollo 13 mission.

The two would-be astronauts have not been identified yet, with much speculation about who they are. What we know is that they are very wealthy as they already paid a “significant deposit” towards the more than $100 million the trip will likely cost.

In 2017, the company plans to conduct health and fitness tests of the passengers and begin initial training. The moon trip will be undertaken on its new Falcon Heavy rocket, which will be launched on its first test this summer. The new rocket promises to be two thirds as powerful as Saturn V, which has taken astronauts to the moon previously. The Falcon Heavy is designed to have 5 million pounds of liftoff thrust. The spacecraft to be involved in the moon mission is SpaceX’s Dragon 2 capsule. 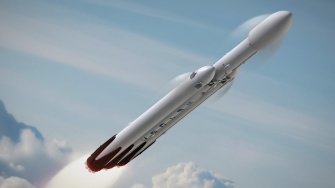 This will be the first time that SpaceX will fly people. As it did have two of its rockets blow up, Musk acknowledged the risks:

The two passengers “are entering this with their eyes open, knowing that there is some risk here,” said Musk. “They are certainly not naïve. We’ll do everything we can to minimize that risk. But it’s not zero.”

Still, he feels good about their chances, saying SpaceX’s “success rate is actually quite high.”

Musk’s plans could fit in well with President Trump’s emerging space program, yet to be laid out in detail. There have been many indications that a return to the moon would receive Republican support and the success by SpaceX in this lunar tourist venture could bode well for its future cooperation with the government. SpaceX already works closely with NASA, which itself has been planning a crewed mission to the moon in 2019, but might change its plans if the SpaceX mission continues as currently announced.

Some doubt whether SpaceX can pull off such a technical feat on such an ambitious schedule, especially as the company has not yet flown humans. Still it would be hard to bet against Musk with any grand ventures. SpaceX recently dazzled with another drone barge landing, while Musk has been getting attention for starting a tunnel-digging business, claiming we are already cyborgs and chiming in on the future of humanity. 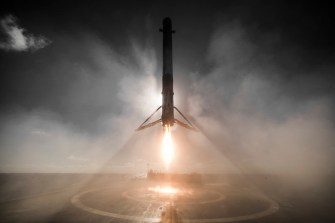 Falcon 9 rocket just before landing on a barge in the Pacific Ocean, on January 14, 2017. Credit: SpaceX

SpaceX sees the circumlunar mission as an exciting step for all of us here on Earth, stating that “Like the Apollo astronauts before them, these individuals will travel into space carrying the hopes and dreams of all humankind, driven by the universal human spirit of exploration.”

Tags
2018circumlunarcosmosDonald Trumpelon musklunar missionmoonnasaplanssciencespaceSpace Xtechnology
In this article
2018circumlunarcosmosDonald Trumpelon musklunar missionmoonnasaplanssciencespaceSpace Xtechnology
Related
The Well
Can we condition ourselves to be heroes?
Neuroscientist Robert Sapolsky on the science of temptation, and the limitations of your brain’s frontal cortex.
▸
6 min
—
with
Robert M Sapolsky
Life
“I went to space and discovered an enormous lie”
What astronaut Ron Garan saw in space changed his life forever – here’s what it taught him.
▸
8 min
—
with
Ron Garan
Why geniuses hunt demons for sport
Jimena Canales shares the “demons” that shaped computer science.
▸
6 min
—
with
Jimena Canales
The Well
The 3 “demons” that haunted legendary scientists
Darwin, Descartes, and Maxwell all believed in these science ‘demons.’
▸
7 min
—
with
Jimena Canales
Harvard professor debunks the biggest exercise myths
Exercise culture is crazy. But what you need to do is exceedingly simple.
▸
with
Daniel Lieberman
Up Next
Culture & Religion
This Bizarre Effect Gives the Ouija Board Its “Mysterious” Power
In a 2012 study, participants used a Ouija board to get in touch with their “second intelligence.”