Astronomers traced the source of a series of puzzling bursts of radio waves, which last just milliseconds, to a dwarf galaxy more than 3 billion light years away.

Duncan Larimer, who was the first astronomer to discover such signals in 2007 (but was not involved in the current study) called the findings “a pretty huge result” in an interview with Washington Post.

What’s special about the waves is that they repeat and seem to be very powerful. So far 18 of them have been recorded but scientists estimate there could be up to 10,000 of them a day. They flare with the power of about 500 million suns, travel very long distances, and can be used to study spaces between galaxies.

“These radio flashes must have enormous amounts of energy to be visible from over 3 billion light-years away,” said Shami Chatterjee, Cornell University’s senior research associate in astronomy and lead author of the paper on the new findings. The dishes of the Karl G. Jansky Very Large Array are seen making the first-ever precision localization of a Fast Radio Burst, and thereby pointing the way to the host galaxy of FRB121102. Credit: Danielle Futselaar (www.artsource.nl)

Because the signals are short and noticed after the fact, they are quite hard to study. The scientists used the world’s most powerful telescopes and much detective work to pinpoint the source of these “fast radio bursts” or FRBs. After capturing an FRB in 2012 at the Arecibo Observatory in Puerto Rico and finding the general area of its location, astronomers looked at that part of space via the larger Karl G. Jansky Very Large Array in New Mexico, and finally zeroed in on it via the Gemini optical telescope in Hawaii.

“With the Gemini telescope, this optical blob looks like a faint, faint, faint galaxy – and this faint, fuzzy blob corresponds with, smack onto, the radio source,” said Chatterjee. 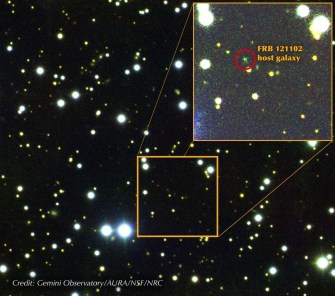 A composite image of the field around FRB 121102. The dwarf galaxy from where the radio bursts originate is circled in red. (Gemini Observatory/AURA/NRC)

This discovery certainly begs the question of what is making the signals. The host galaxy appears to be quite small, in fact, a hundred times lighter than the mass of the Milky Way.

“We are the first to show that this is a cosmological phenomenon. It’s not something in our backyard. And we are the first to see where this thing is happening, in this little galaxy, which I think is a surprise,” Law said. “Now our objective is to figure out why that happens.”

“We think it may be a magnetar – a newborn neutron star with a huge magnetic field, inside a supernova remnant or a pulsar wind nebula – somehow producing these prodigious pulses,” said Chatterjee. “Or, it may be an active galactic nucleus of a dwarf galaxy. That would be novel. Or, it may be a combination of those two ideas – explaining why what we’re seeing may be somewhat rare.” But, really, could it be aliens? Chatterjee thinks there’s probably a more prosaic reason:

“We’ve joked about spaceship battles and death stars blowing up, but we think we can explain it with ordinary physics,” said the astronomer.

You can read the paper here in the journal Nature.

Cover photo: The globally distributed dishes of the European VLBI Network are linked with each other and the 305-m William E. Gordon Telescope at the Arecibo Observatory in Puerto Rico. Together they have localized FRB121102’s exact position within it’s host galaxy. Credit: Danielle Futselaar (www.artsource.nl)

How did the troughs form?
Up Next
Starts With A Bang

The rainbow-like effect seen at right is due to very high-altitude ice crystals affecting the optical phenomenon of a Sun-dog; the Sun itself looks completely white. Image credit: flickr user […]