For over a century, the two leading theories in physics have had irreconcilable differences, and scientists have scrambled to find ways to square them, to no avail. An experiment proposed in 1957 by American luminary Richard Feynman, is now getting a makeover, and the results could be significant.

Scientists at Oxford University and University College London (UCL), are attempting to overhaul one of the late Nobel Laureate’s experiments and in doing so, hope to heal the rift in a dramatic fashion. Could a Theory of Everything be near? This would be incorporating all four physical forces: gravity, electromagnetism, and the strong and weak nuclear forces, into one solid working theory.

Thus far, theoretical physicist Steven Weinberg, himself a Nobel Laureate, has only been able to combine electromagnetism and the weak nuclear force. A final theory—as Weinberg calls it, would mark the end of physics as we know it. Although the laws of general relativity and quantum mechanics work exceptionally well in their own spheres, some of the rules that govern one area don’t work in the other, and vice-versa. For instance, Relativity explains the gravitational force as it relates to bodies on Earth or in space. But it falls apart on the quantum level. 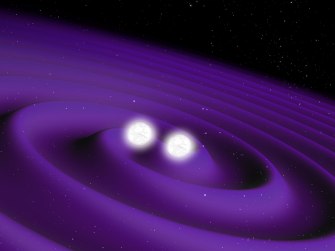 The merging of two neutron stars. Einstein’s general relativity helps us understand the gravitational forces involved well. Where it gets lost is on the quantum level. Credit: European Space Agency (ESA).

The current upgrade to Feynman’s proposal focuses on quantum gravity. Two papers on the upcoming experiment were published in the journal Physical Review Letters. In the first researchers write, “Understanding gravity in the framework of quantum mechanics is one of the great challenges in modern physics.” A lot of experiments have been proposed, but it’s proven extremely difficult to test quantum gravity in the lab.

One of the reasons, researchers write in the second paper, “Quantum effects in the gravitational field are exceptionally small, unlike those in the electromagnetic field.” Sougato Bose leads the UCL team. He told Physics World, “For example, even the electrostatic force between two electrons overtakes the gravitational force between two kilogram masses by several orders of magnitude.”

These physicists believe if they can detect gravity on the quantum level, it would help us better understand why it operates so differently there, and perhaps reveal the secret to navigating between our two prevailing theories. Feynman’s idea to test for quantum gravity surrounds something known as superposition. A particle is thought to exist in all possible states or positions at once, until measured. Then you can nail down its exact location (or velocity, but not both).

Feynman speculated that using quantum entanglement, one could take a small mass and place it inside a gravitational field, causing it to become entangled with the field on the quantum level. Then, the physicist would be able to detect the field’s interference, before indicating the mass’s position. The interference itself would cause the mass to take a single, specific location or form, which would occur before the mass separated itself from the field. And so in this way, quantum gravity could be detected. 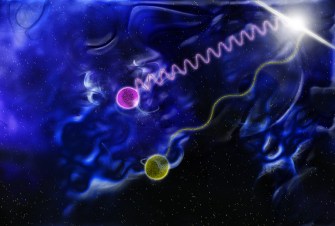 Illustration of a quantum gravity photon race. The purple or high energy photon carries a million times the energy of the yellow one. Yet, it’s thought to move slower as it interacts more with the frothy material of space. In 2009, satellites measured a gamma ray burst from a neutron star collision. Curiously, after traveling approximately 7 billion light years, a pair of such photons arrived just nine-tenths of a second apart. Credit: NASA Goddard Space Flight Center.

Oxford researchers Chiara Marletto and Vlatko Vedral worry that since entanglement isn’t measured directly in Feynman’s proposed experiment, it wouldn’t provide direct evidence of quantum gravity. By quantizing not one but two masses and entangling them, the Oxford physicists say, quantum gravity can be detected directly. Each mass would be in superposition and entangled in a quantum gravity field. UCL physicists added their own element, a “quantum gravity mediator,” to entangle the masses.

To conduct the experiment, two identical interferometers will be placed adjacent to one another. These usually split light up into its constituent parts. But down on the quantum level, these devices interfere with a mass’s quantum wave function, in order to superimpose its quantum state. If gravity is operating on the quantum level, the two masses will become entangled before each leaves its own interferometer. 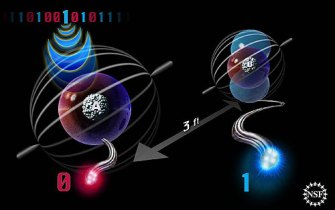 Our two teams took slightly different approaches to the proposal. Vedral and I provided a general proof of the fact that any system that can mediate entanglement between two quantum systems must itself be quantum. On the other hand, Bose and his team discussed the details of a specific experiment, using two spin states to create the spatial superposition of the masses.

This isn’t a done deal by any means. Electromagnetic forces might interfere with the entanglement before researchers are able to measure the effects of quantum gravity. Even if the gravitational field is quantized, quantum gravity may be harder to detect than scientists predict. But if it does work, it could lead to quite a breakthrough.

There are a lot of theories on how gravity operates on the quantum level. It may originate from particles called gravitons, which would be carriers of gravity much like how photons carry electromagnetism. Quantum gravity and string theory have their own bends. The results of this experiment could help us sort quantum gravity out, and perhaps lead to a final theory, at which time, it’d be the dawning of a whole new understanding of the universe and how all its forces fit together.

To learn more about where we’re at with the Theory of Everything, click here:

Peeking behind a black hole: how matter bends space that bends light

Albert Einstein and his theory of general relativity continue to amaze us to this day.
13.8

Is the physical universe independent from us, or is it created by our minds, as suggested by scientist Robert Lanza?
13.8

No. But Buddhism and quantum mechanics have much to teach each other.
Hard Science

New studies stretch the boundaries of physics, achieving quantum entanglement in larger systems.
Up Next
Health

Researchers discover how the brain triggers our attraction to the opposite sex and sexual behavior.