Astronomer Carl Sagan was a great science communicator, most widely known for the original “Cosmos” television series. He was also a prolific writer and in 1995 wrote the book The Demon-Haunted World: Science as a Candle in the Dark that touches on a variety of topics, from spirituality to debunking alien abductions, but ultimately serves as a passionate argument for science and the scientific method.

What’s noteworthy is that a quote from the book has been picked up recently all over social media, based on its description of a future America that is eerily similar to its current state. While Sagan generally projected optimism, the quote describes a possible dystopian society, with much division, confusion, mistrust of authority, and a growing gap between the haves and have nots under an increasingly authoritarian leadership.

“Science is more than a body of knowledge; it is a way of thinking. I have a foreboding of an America in my children’s or grandchildren’s time—when the United States is a service and information economy; when nearly all the key manufacturing industries have slipped away to other countries; when awesome technological powers are in the hands of a very few, and no one representing the public interest can even grasp the issues; when the people have lost the ability to set their own agendas or knowledgeably question those in authority; when, clutching our crystals and nervously consulting our horoscopes, our critical faculties in decline, unable to distinguish between what feels good and what’s true, we slide, almost without noticing, back into superstition and darkness.” 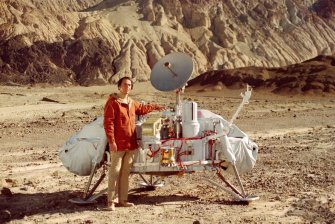 Dr. Carl Sagan poses with a model of the Viking lander in Death Valley, Calif. Image credit: NASA
The quote was initially shared by the director of the public radio show “Science Friday” Charles Bergquist.

Suspecting Carl Sagan had either a time machine or a crystal ball.

Notably, in the chapter that includes the quote, Carl Sagan discussed a few American cultural phenomena of the time, like the TV show Beavis and Butthead and the movie Dumb and Dumber. He uses these as examples of the “dumbing down” of America. One can only wonder how he would update his take on America’s future if he was alive today.

You can read the selection from Carl Sagan’s book and the rest of the chapter here.

Here’s Carl Sagan talking about the future of humanity in Cosmos (1980):

The first human that isn’t an Earthling could be in our lifetime.
▸
5 min
—
with
Robert Curbeam
Up Next
Culture & Religion

How hypnotizable are you? There’s a test for that.

Ever lose yourself in a great book or movie? This is a form of hypnosis.