According to Einstein’s theory of relativity, the speed of light in a vacuum and gravity are the same. This is nice and orthogonal, but if the universe began with a hot big bang 13.77 billion years ago give or take .059 billion years, there’s a problem scientists have been struggling to explain. If light particles and gravity waves travel at the same speed, there simply hasn’t been enough time for the universe to become as evenly heated as it seems to be. Light — and thus, energy and heat — just doesn’t travel fast enough to have reached across its entire radius in roughly 14 billion years. The prevailing explanation is the “inflation theory” in which the universe at first expanded slowly enough for it to reach a uniform temperature, and then picked up speed to reach its current estimated radius of 46 billion light years across. However, many feel that inflation is an idea lacking in evidence or a logical mechanism. Another idea is that the speed of light used to be faster, and now a team of scientists have come up with something unique in this field: A way to definitively test a theory.

The issue the ideas are attempting to address is called the “horizon problem.” If you could see to the farthest star (we can’t actually see nearly that far with the naked eye) on your left, it would be 14 billion light years away, or 14 billion years in the past. At your far right would be another 14-billion-year-old star. Scientists would say that both stars are in “causal contact” with us because their light has reached us, and causal contact is something that’s required for energy/heat to be exchanged. 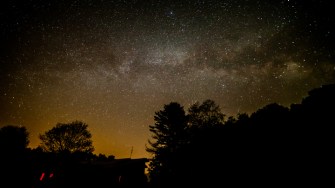 On the other hand, the distance between our far left and far right stars would be 28 billion light years, and that means two people standing on those stars wouldn’t be able to see each other yet because it would take 28 billion years for light to travel between them and the universe is only 14 billion years old. These stars are not in causal contact, and thus no energy/heat has yet had time to travel between them. So why does the spectral index, a reading of the cosmic microwave background (CMB) — a snapshot of the oldest light in the universe — show the same temperature everywhere?

One of the people who first put forward the idea that the speed of light might have been faster at some point and thus able to overtake the outward expansion of matter was João Magueijo from Imperial College London. He’s now developed, along with Niayesh Afshordi at the Perimeter Institute in Canada, a model that predicts a very specific spectral index value that would confirm the speed of light used to be higher: 0.96478. Current readings of the CMB are not that far off — 0.968 — and they’re getting more precise all the time. It’s Magueijo’s hope that in the near future, the Planck satellite measuring the CMB will either match the model’s prediction, proving the theory, or definitively contradict it, thus ruling it out. 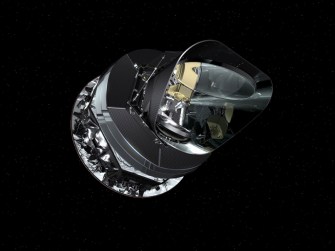 Magueijo tells New Scientist, “That would be great — I won’t have to think about these theories again. This whole class of theories in which the speed of light varies with respect to the speed of gravity will be ruled out.”

You might expect Magueijo to be pulling for his theory to be confirmed, but really, he’s just hoping for one irrefutable answer in a field that’s made up almost entirely of so-far unprovable theories. Which is to say, he’s just looking for some plain-old truth.

A new model addresses a longstanding problem: where do quasars get the fuel they need to outshine entire galaxies?
13.8

What was the universe like one-trillionth of a second after the Big Bang? Science has an answer.
Hard Science

The eastern inner core located beneath Indonesia’s Banda Sea is growing faster than the western side beneath Brazil.
13.8

The great theoretical physicist Steven Weinberg passed away on July 23. This is our tribute.
Hard Science

Happiness Should Be A Verb — A Thing We Do, Not Be

“Positive psychologists” are relearning old wisdom about a logic built into our biology which ensures that flourishing takes effort and skill.