A project, two years in the making, was revealed this week at the Computer Human Interaction conference in B.C. The device created by students from Texas A&M University is called ZeroTouch and looks like an empty picture frame. Don’t let the looks deceive you, though. It is equipped with infrared sensors and embedded LEDs which help translate human movement into computer commands. When a finger or other device is introduced into the invisible plane, the infrared signals sent from LEDs on one part of the frame are blocked from reaching the complementary sensors on the opposite side, which is then interpreted as a touch. 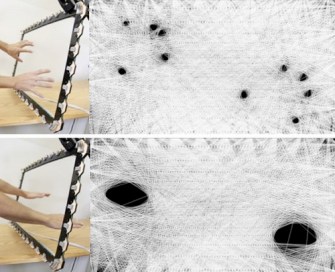 When ZeroTouch is laid flat on a table it can be used as a drawing board, mounted on a computer screen it can be used as touchscreen device (cheaply converting any regular computer), and if hung in the air it can be used as a virtual canvas for painting. Another difference between ZeroTouch and other types of touch screen is that it requires no pressure and according to its creator Jonathan Moeller it tracks 20+ fingers in its current configuration. This makes possible the use of gestures such as pinching and spreading. The team is also working on a three-dimensional device that should allow for hovering and 3-D hand manipulation of virtual objects.

Sorry about the scarcity lately – it was graduation weekend here at Denison, so that always keeps me more than busy. However, now that graduation is done, summer is officially […]