In the 35 years since I got my first job  teaching writing, a few new tools that make writing easier have been invented. I used a retractable fountain pen, one of the green marble ones, when I was in 3rd grade to write those ‘important papers’ – really messy.  I thought mechanical pencils were cool -I think the ones I used worked better than the cheap ones floating around my class these days.  Copiers were a big improvement over mimeographs; computers are way better than IBM Selectrics which were way better than Remington ‘portables.’

For the last three years, the 21st Century tool, Moodle,  has enabled me to make writing fun for 8 and 9 year olds, the ones who start welling up with tears when you tell them that all of the words they just managed to get on a piece of paper with a pencil should be reordered or changed. A word processor and the Moodle software make editing, all that adding and subtracting of words, peer comments, and teacher comments easier and doable for the young minds and fingers that are still wrestling with this puzzle called written language. (I share Donald Murray’s notion that writers never really quit wrestling with language.)

Moodle was designed in the early days of this century as a distance learning tool.  It’s rapidly becoming an invaluable tool for teaching in all kinds of classrooms.  There are over a million teachers in over 200 countries using it, so far.  Last spring on Earth Day, my class was paperless for the day. We took a learning walk and explored the history and science rich neighborhood near our school.  I posted this and and a few other photos when we got back from our walk.  In less than an hour my students had posted over a hundred comments on the pictures. (With a click or two, I can show them to you, too.) 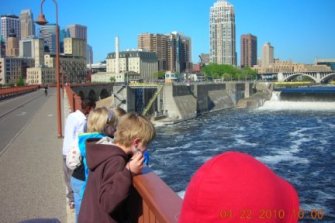 Moodle also enables me to post pictures from our sessions with the U of Mn Teaching Smart scientists that then serve as prompts for my students to go deeper into their understanding of the activities they do with the scientists by writing and sharing their writing with each other and me. 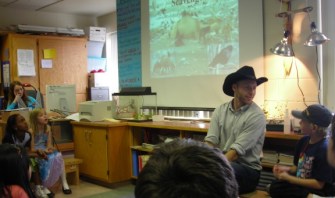 U of Mn  biologist, Brandon Breen, showed the students how to identify scavengers.

Some of those scientists who can’t get away from their labs at the University use Moodle to act as online tutors for my 3rd and 4th graders in their science writing- a real win-win-win.  It’s real time authentic assessment, and it’s engaging students with their wider learning community, connecting them with real doctors of science who know about insects and worms and skulls and rocks and butterflies, the kind of things that excite 8 and 9 year old kids.

Already this year, my students have taken to using our new Google Apps like ducks to water. Google docs adds some nice new capabilities for formatting, printing and sharing that weren’t as easily available with Moodle. Google Apps and Moodle work very nicely together.

The ‘standards’ based curriculum being prescribed by the data-driven accountability that put my school on AYP hardly mentions computers or 21st Century communication tools of any kind (and I don’t think that’s atypical of most curricula in K-12.)  The guest speaker at our summer elementary science professional development session spent a whole day talking about how important writing is to scientific inquiry, but never said a word about the tools that almost every scientist uses these days to record and write up their data and reports – computers. The irony is that these new writing and reading standards based curricula that ignore computers like the Taliban ignores razors are based on the process theory of writing fathered by Donald Murray who noted way back in 1985 how computers significantly improved the writing process (his observations are listed down the page in this post.) Murray said in his last days, “Click the computer on and I am 17 again, wanting to write and not knowing if I can.”[1]

Our students need instruction and practice using the tools that the world is now using and will be using in the future for writing of all kinds.  21st Century tools like Moodle, Google docs, and e-Portfolios can replace data-driven accountability with knowledge and skill driven accountability. The National Education Technology Plan 2010 does a good job laying out the way to get where we need to go; we just need to start working the plan.

Dan McGuire is the 1976 recipient of the Archer B. Gilfillan Prize for Poetry.  He lives with his wife and children in Minneapolis in the vortex of the Hiawatha, Minnehaha, Nokomis, and Keywadin neighborhoods. He’s on Twitter as @sabier

First I’d like to say thanks to Scott McLeod for the opportunity to write a post for Dangerously Irrelevant. The topic of student collaboration is one that has been bouncing […]