The telecommunications industry is stumped by the baby boomers.The first cohort to refuse to let products or services define them as ‘old’,one would think the boomers would be quicker to acquire smart phones, whichpromise prompt responses to work-related emails and apps to followeverything from your stocks to your progress in training for that midlifecrisis half-marathon.

But statistics suggest the boomers in the United States arelagging behind their counterparts in Europe and Japan. In Europe, a largerpercentage of people age 45 and up carry smart phones than in the US. In Japan,mobile media use among people 45 to 60 years old – Japan’s Dankai generation – significantlyoutstrips both Europe and the United States. Even though they are the largestdemographic age group in the US, baby boomers represent less than a quarter ofsmart phone owners,.

According to Neilsen (see below) found that the 45+consumer comprise about 10% of smart phone users for each of the most popularoperating systems, e.g., Apple’s iPhone, RIM’s Blackberry. 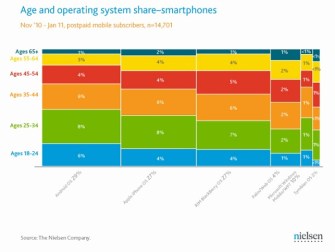 Why are US boomers hesitating to invest in smart phones? Theyare not techno-adverse – just visit any consumer electronics store and see whois buying the high-tech, high-style and indeed high-priced nexgen flat and fastsomething. Instead, there may be three possible explanations that combinedreduce the perceived value of the smart phone for baby boomers in the UnitedStates – cost, connectivity and context.

Signing the two-year contract for a smart phone with a dataplan has a total cost of ownership in the thousands. It would be difficult toconvince those who recently received a wake-up call regarding their retirementpreparedness that short-term spending of this magnitude could make their prospectsany brighter. According to Gallup, average Baby boomer daily spending was at$98 per day in 2008 and dropped to $64 in 2009. US consumer spending isever-so-slightly on the rise now, but then, so are gas prices. As argued inprevious articles (see Fashion, Function & Fun: Product Design Demands of Older Baby Boomer Consumers), thequestion an older consumer asks – does a smart phone provide value commensuratewith the price commanded by both the device and service?

Unlike other countries, the United States was connectedbefore the era of smart phones. This was seen ten years ago when cell phone usein developing nations exploded. In the United States, landlines were ubiquitousand connected the country. In other countries not wired together by copper wirewhere many houses were without phones, acquiring a cell phone was cheaper than thepublic investment in infrastructure and having one’s house hooked into thenetwork. The Pew Internet and American Life Project‘s Lee Rainey reports that 74% of baby boomers use the Internet and 63% have broadband connection. In other words, Boomers are using the Internet the“old-fashioned” way, via the computer, both at home and at work. This is thegeneration that remembers the sound of a successful modem connection over thephone. Visit any other nation and the prevalence of Internet cafes (wherecustomers pay by the minute to access the internet) will show that many householdsare still not using desktops or laptops to get online. For these users mobileplatforms are cheaper and data plans are more convenient than getting wiredinto the network.

How baby boomers communicate was never set in stone. Fromthe fax machine to the personal computer to the first Motorola, baby boomershave seen—and embraced—it all. Pew estimates that in their pockets and purses 81% of baby boomers own a cell phone. Older consumers do demand value for theirmoney.  Connectivity forconnectivity sake is not a high enough bar to warrant investment in time ormoney. Consumers over 45 have developed and refined ways to get their dailyinformation and communications tasks done. New as well as practical smart phoneapplications and strategic partners in the retail, health, financial services as well as game industries will be the lead innovators to make the case for why a babyboomer should buy let alone invest the time to learn to use the device.

There is no doubt boomers are playing an increasingly largerrole in these numbers as smart phones become more responsive to the diversityof lifestyles of users across the lifespan. These numbers wont surge givencurrent applications, because unlike their teen children, boomers have neitherthe time to post their ‘status’ every five minutes nor the interest in watchingvideos on their cell phone. After all, isn’t that what they are buying thosehuge flat-screen televisions for?

Angelina Gennis, MIT AgeLab, researched and contributed to this article.

Why the Bin Laden Death Photos Need to Be Seen