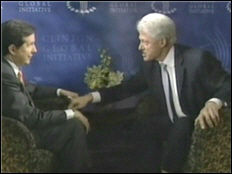 News outlets and the blogosphere are abuzz over Bill Clinton’s appearance on Fox News Sunday. The whole episode is a classic example of how the negotiation of news between journalists and powerful sources can sometimes go wrong, especially when the two parties might ultimately have competing goals.

After hosting a week long summit on global warming that raised $7 billion, Clinton wanted to use Fox News to reach its GOP viewers on the issue. Clinton’s effort was paired with agenda-building activities during the week that were designed to attract attention among GOP members of the public who would otherwise tune out the events, activities that included a keynote address by Laura Bush and an appearance by none other than Rupert Murdoch.

Fox News agreed to ground rules that global warming would be the dominant topic of the interview as a way to gain an exclusive with the former President. Things went awry, however, when Wallace asked Clinton about his record on Al Queda and his administration’s failed attempts to capture Bin Laden. In response, Clinton did the only smart thing he could, he went on the offensive, not only defending his record, but also exposing the “backstage” agreement that journalists and powerful officials work out to stage media appearances. (Transcript here and full video here.)

CLINTON: You said you’d spend half the time talking about what we did out there to raise $7 billion dollars plus over three days from 215 different commitments. And you don’t care.

When Fox News actually ran the taped interview, they introduced the segment with their side of the ground rules, claiming that they had agreed with Clinton to spend 15 minutes on global warming and 15 minutes on anything else.