Have you been to this subway station? 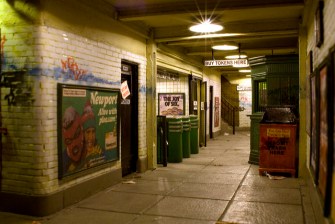 Look again. It’s not actually real. It’s part of a miniature model, on display at the Museum of Art and Design’s Otherworldly: Optical Delusions and Small Realities exhibit (open through September 18).

The exhibit focuses on art that plays with our view of reality, from miniatures of startling detail to photographs of those miniatures that are so life-like that we may be tricked into thinking them real. Why would this matter to a decision maker? The art, I would argue, forces us to view reality from an alternative perspective, to grapple with it in a way that we do not often do – and in so doing, become more mindful and more creative in our approach to our lives.

A change in perspective engenders mindfulness and creativity

Nabokov wrote that there is something intrinsically artistic in diminishing large things – and in blowing up small ones. And, I would argue, not just artistic.  A change in scale forces us to take note. Objects that we would never notice acquire significance, become worthy of examination and attention. In other words, they force mindfulness.

In a past post on optical illusions, I noted the power of framing, or comparison, in making both perceptual judgments and decisions. While these artists’ illusions are different, they also force us to reconsider the world, to look at things from a different angle. And sometimes, that change in perspective can be the spark that makes a difficult decision manageable – or that engenders creativity where none existed before. Consider a famous problem-solving experiment, originally designed by Norman Maier in 1931: A participant was placed in a room where two strings were hanging from the ceiling. The participant’s job was to tie the two strings together. However, it was impossible to reach one string while holding the other. Several items were also available in the room, such as a pole, an extension cord, and a pair of pliers. What would you have done?

When pliers become a pendulum: the power of insight

Most participants struggled with the pole, with an extension cord, trying their best to reach the end while holding on to the other string. It was tricky business.

The most elegant solution? Tie the pliers to the bottom of one string, then use it as a pendulum and catch it as it floats toward you while you hold the other string. Simple, insightful, quick.

But very few people could visualize the change in object use (here, imagining the pliers as something other than pliers, a weight that could be tied to a string) – unless, that is, the experimenter seemingly by accident brushed one of the strings to induce a swinging motion. Then, participants appeared to spontaneously think of the pliers solution. I say spontaneously because they did not actually remember the stimulus that prompted them to do so. It was a so-called unconscious cue.

A flexible perspective, a flexible mind

This study was one of the first to shed light on the power of insight, or the “eureka” moment. It also underlined how crucial it can be to be flexible in your perspective, to challenge yourself to see the world in a less-than-obvious way (here’s another problem of the same sort: you have a candle, a box of tacks, and a book of matches; your goal is to attach the candle to the wall; what do you do—without, of course, looking up the solution? If you come up with an answer that you are sure will work, do you think you would have thought of it without the prior prompt?).

The miniatures, the altered realities, the visual illusions in Otherworldly throw the same mental challenge to decision makers: challenge your perspective. Change the way you see your world to engage with it.  And maybe, in embracing that challenge we can become more mindful of our surroundings, more ready to engage, to create, to change our perspective in contexts that do not explicitly ask us to do so. Then, perhaps, we’ll be one of the solitary few who walked into Maier’s room of strings, thought for a second, tied the pliers to the string, and completed the task with elegance, alacrity, and insight.

Social media played a huge role in the collaborative ncampaign that led Giuliano Pisapia to being elected mayor of Milan. Now he says it will also help ensure he doesn’t sell out.