Six months ago, in late April, Research teams at the NASA Infrared Telescope facility in Hawaii made an astonishing discovery. They found that both water ice and organic compounds exist on an asteroid named 24 Themis which circles the Sun between the orbits of Mars and Jupiter. The discovery stole the headlines, and it was thought to support the notions that asteroids may have long ago been the delivery system for a lot of the materials that are essential for life here on Earth. 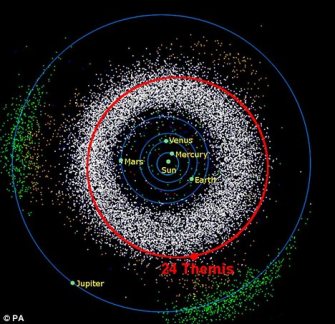 Well, on Friday the headlines were swamped again, as scientists confirmed the discovery of water ice and organic molecules on a second asteroid (65 Cybele) in the same region of the asteroid belt. Although the asteroids only contain very thin layers of ice, they suggest that water may be quite common on asteroids after all.

You will have to wait to read the entire research study in the European Journal of Astronomy and Astrophysics after it’s submitted by the team, but in the meantime you can scroll through a variety of different research papers in the free section on the journal’s website. If you would like to be alerted as new articles are published online, you can sign up for their e-mail alerts.

“Shortly before the announcement of National Security Advisor James Jones’ resignation, Spiegel spoke to him about the war on terror and the state of Pakistan.”