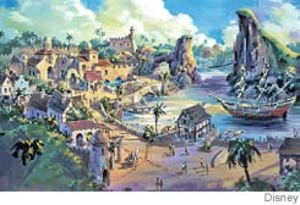 This case study of Disney kicks off what I hope becomes a regular series on business innovation that I’m calling “Survival of the Most Innovative.” (an obvious reference to the Darwinian concept of the “Survival of the Fittest”) Yesterday, the Wall Street Journal (free feature) described the launch of a brand new innovation strategy at Disney:

“Ever since Walt Disney opened Disneyland in 1955, Walt Disney Co. has rarely strayed from his original vision of what a theme park

should be. But at a top-secret development unit these days, the company

Disney is hatching plans to take its theme-park

experience to the masses, rather than the other way around. Instead of

building more big parks, the company is sketching out a string of niche

resorts and attractions around the world. That could include such

things as stand-alone, Disney themed hotels in cities and beach

In the near term, the company is using the Disney name

to expand in other areas of the travel business. For example, it is

ramping up an operation called “Adventures by Disney,” in which

travelers pay for guided Disney tours to popular destinations including

Italy and Ireland. The company also plans to build its presence in

time-share vacation homes in places like the Caribbean. And it is

bulking up its popular cruise line, with more Disney ships in the cards.”

So, what are the takeaway lessons here from the Disney case study?

have an established consumption pattern.”

(2) Disney realizes that it sits within an ecosystem of other entertainment providers, and must scale its ambitions accordingly. “Instead of saying where will the next Disneyland be,

an immersive experience appropriate to the size of the market. Not

every market can support a full-on Disney location.”

(3) Disney examined its organizational DNA and decided to go with the types of offerings that seem to offer the best fit. “Another challenge is tailoring the niche attractions

to local markets while keeping the Disney brand intact…”

And, like just about every other business today, Disney is keeping its eye on the long-term growth potential of Asia-Pacific. Anyway, instead of thinking itself as a “content machine” that must be re-oiled and re-engineered, Disney is thinking of itself much more as a living, evolving organism that must explore new evolutionary niches while at the same time exploiting existing niches. (if you haven’t already guessed, this is going to become a big theme here on the Endless Innovation blog)