A long weekend right about now does wonders for getting a little focus back, especially after such a busy week with the eruption of Grímsvötn. I even got a weekend relatively free of volcanism! Ah, but the work week has begun so let’s start with some news from around the world.

Iceland: When the Grímsvötn eruption began a little over a week ago, there was much concern about the longterm travel implications of the ash from another Icelandic eruption. However, as of today, the eruption of Grímsvötn has been declared “over” by the Icelandic Meteorological Office (IMO) after only 9 days (relatively short for eruptions from Grímsvötn). The Grímsvötnpast few days have seen very little activity at the Grímsvötn vent, with only steam from the crater area. So, just like that, Grímsvötn moves out the headlines, with less impact than we might have expected. However, there has been some suggestion that we might be entering a period of higher activity at Grímsvötn that might produce a number of these styles of brief, explosive eruptions over the next decade (or more), but we will have to wait and see if this prediction comes to pass.

Philippines: Halfway around the world, concern is growing for a potential eruption at the Taal caldera. PHIVOLCS reported at least 115 measurable earthquakes at the volcano on Sunday (May 29), suggesting abundant magma movement under Taal. However, on Monday the earthquake count dropped to 31. So far, none of this seismicity or changes in the temperature/acidity of the lake waters on Volcano Island have lead to any sort of eruption, but all these signs mean the chance is there for some sort of volcanic activity. PHIVOLCS has yet to change the Alert Status from Level 2 as there is no evidence of an eruption happening soon – at the scale of days – but Philippine volcanologist Jamie Sincioco said that the earthquake swarms in 1994 reached thousands of earthquakes per day, bu did not lead to an eruption. Adding to the tension at Taal are the fish kills that have occurred over the last week – upwards of 750 tonnes (see below), requiring a backhoe to remove the dead fish, all of which have been attributed to non-volcanic origins. 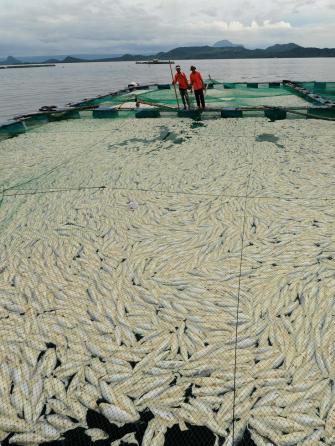 Dead fish on Lake Taal in the Philippines.

Indonesia: I missed posting last week’s GVP update, so I thought I’d throw it in here before this week’s report comes out. Lots of the usual suspects in the report, but one new volcanic system to make the report was Indonesia’s Dieng Volcanic Complex. The Dieng Plateau (see below) is a group of stratovolcanoes, older calderas and smaller volcanic cones, mostly producing lava flows and the occasional phreatic explosions. However, it is a site of potential geothermal exploitation in Indonesia thanks to high heat flow. However, it is still an active volcanic complex that last had an eruption in 2009 and this week’s report mentions an increase of carbon dioxide emissions and small white plumes (less than 25 meters). Yesterday, those CO2 emissions were accompanied by a small phreatic explosion at the Timbang Crater, leading Indonesian volcanologists to raise the Alert Status to Level 3, suggesting an eruption is imminent. 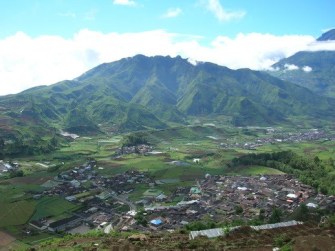 An undated image of part of the Dieng Volcanic Complex, Indonesia.

Hawai`i: After this March’s Kamoamoa fissure eruption on Kilauea, there were a lot of questions about how quickly would the volcano return to the previous activity – namely, lava lakes at Pu`u O`o and Halema`uma`u. It now appears that Pu’u O’o crater has seen the reestablishment of a lava lake in the formerly drained crater – and the USGS released a time lapse video of the lava lake’s growth over the past two months. The new lake has been described as an “above-ground swimming pool”, betraying its perched nature. Overall, activity is rather low at Kilauea, with low seismicity, deflation at the summit and slowly increasing gas emissions, likely all products of the magmatic system reestabilishing itself after the Kamoamoa Fissure. Remember, HVO has set up multiple webcams pointing at Pu`u O`o,s o you can watch the development of the lava lake as the summer progresses (and I’ll have more on Hawai`i later in the week.)

Russia: After the Grimsvotn events, flight diversions are on everyone’s mind, so it isn’t too surprising to find more coverage of the not-uncommon explosive activity in Kamchatka. Yesterday, Shiveluch produced ash plumes reaching as high as 9 km / ~30,000 feet, causing some diversions of international flights across the region, mostly those headed from North America and Europe to Japan and South Korea.

Top left: A thermal image of the lava lake at the Pu`u O`o Crater on Kilauea, seen April 18, 2011. Image courtesy of HVO/USGS.

It’s 2011. If you’re invisible to the world, aren’t you also irrelevant to the world?I use the Rapportive plugin for Gmail. It’s a pretty powerful little add-on that gives me […]