If we heard anything this winter from Eruptions readers in California like Diane, it was that it was snowy in the mountains. Very snowy. We’re talking 50-100% more than usual sorts of snow levels. This, it turns out, was more than just rumor as the trip I took to Lassen Volcanic National Park was almost sidelined by snow – in mid July! However, the weather gods took kindly to us and the Summit Lake North campground (elevation 6695 ft) opened on the day we had our reservation … July 22. Yes, it didn’t open until almost the end of July and what greeted us in the Park was at first very little snow and then, close to the Bumpass Hell and the trailhead for the Lassen Peak summit trail, snowbanks on the side of the Park road that reached 8-10 feet (2.5-3 meters). The snow was still in full force.

This trip didn’t have a lot of science to it – the goal was for my summer/senior research student to see where the samples of the 1915 eruptive products from which he extracted zircon came. So, mostly a “look-see” trip, which was a lot of fun. I’ve culled a few of the best pictures from the trip (taken by me or Theresa Kayzar, a friend from UW days). I’ve added a little commentary as well for content. Enjoy (the snow). 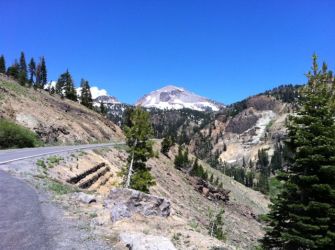 The road towards Lassen Peak from the South Entrance of the park. At lower elevations, there wasn’t any snow on the ground. 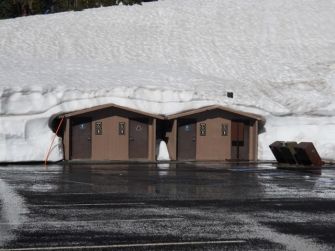 However, once you got to the highest part of the road above 8000′, the game changed. This is the snow at the parking lot for the Lassen Peak trailhead on July 23, 2011. 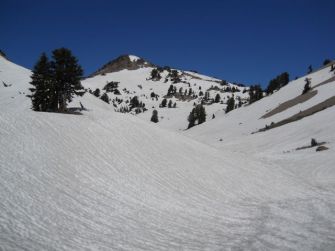 We saw a skier out on these slopes, seen from the Lassen Peak trail. 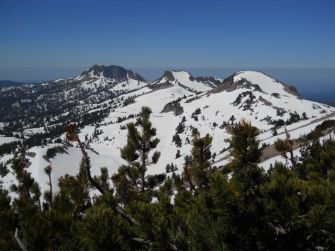 Brokeoff Mountain, one of the ancestral volcanoes (Mt. Tehama) of the Lassen Volcanic Field, as seen from the slopes of Lassen Peak. 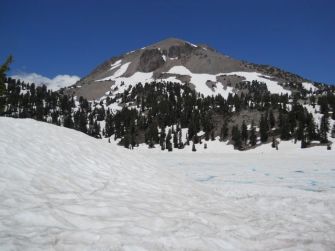 A view of Lassen Peak from near the Bumpass Hell trailhead. Note that Lake Helen, in the foreground right, is still frozen over on July 25, 2011. 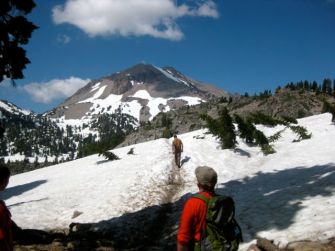 Part of the Bumpass Hell trail, still covered with snow. Lassen Peak is seen in the background, with me in the foreground and Gary Eppich heading off down the trail. Slushy conditions reigned. 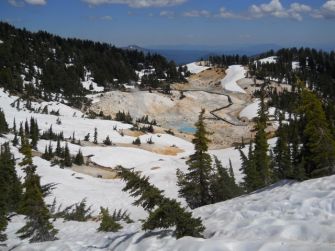 Our first view of Bumpass Hell. The final descent involved skittering down the snowy hillside to get to thermal area. To give you a sense of snowdepth, many of the trees in the foreground were buried up to 6 feet / 2 meters in the snow. 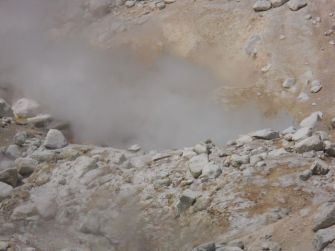 Even with all the snow, the water levels were relatively low at Bumpass Hell. However, the steam vents (fumaroles) were still going strong. 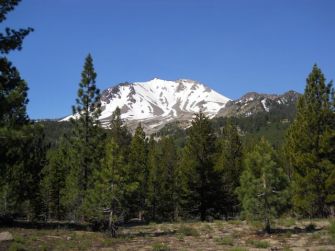 Lassen Peak as seen from the Devastated Area, named as such after being destroyed during the 1915 eruption. All the trees in the foreground have grown since that event. 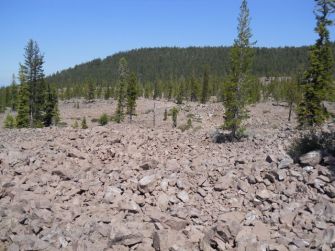 The Chaos Jumbles on the north side of the Park Road. This is the product of a massive debris avalanche from Chaos Crags. The Crags are a series of rhyodacite domes that erupted ~1,100 years ago, so the Jumbles has to be younger than that – in fact, they might be as little as 300 years old. This spot in the Jumbles is almost 2 miles / 3.2 km from the Crags themselves. 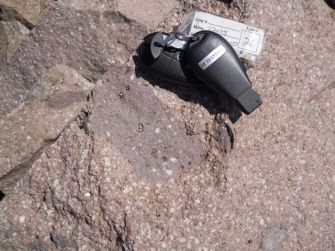 Looking at some of the debris in the Jumbles shows the hallmark of many lavas erupted at the Lassen Volcanic Field – magma mixing. These chunks of one lava mixed into another (called enclaves or quenched inclusions) can be found in many lavas erupted over the entire history of the Volcanic Field and are especially abundant in the 1915 Lassen Peak and Chaos Crags lavas.

Definitely the snowiest it has been on any of my visits to Lassen Peak, but it did not deter from the fun and awe of the southernmost Cascade volcano.

A Carrington-magnitude event would kill millions, and cause trillions of dollars in damage. Sadly, it isn’t even the worst-case scenario.
Up Next
Guest Thinkers

I’ve had an interesting conversation with a colleague the past few days about an earlier piece I wrote here, Cool Dudes, Hot Temps: The Climate Change Battle Will Get […]