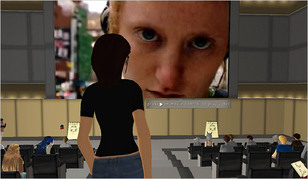 In the Sunday New York Times, Dave Itzkoff explains how and why TV networks and cable stations are experimenting with virtual worlds such as Second Life. It’s all part of their attempt to remain relevant for young audiences, while at the same time, making TV-watching a more social experience. In some cases, they are creating virtual avatars to interact with consumers, and in other cases, they are hiring companies like Electric Sheep to build entirely new worlds for viewers of their shows. In a best case scenario, argue technologists, virtual worlds like Second Life could become a complementary technology for TV:

“…If the wildest dreams of some very excited technology developersncome true, virtual reality might finally be the medium that unites thenpassive experience of watching television with the interactivenpotential of the Web. If that happens, the television industryn— which has not been particularly speedy in adapting to the Internetnrevolution — sees an opportunity not only to recover lost ground fromnonline competitors but also to take a lead, and in so doing create annentirely new environment in which to influence and sell to its audience. “Younwant to be in this because you know, as a content provider, that thisnis where the future is going,” said Quincy Smith, the president of CBSnInteractive. “I don’t look at it as science fiction. I look at it asnthe future of communication.”

If TV killed the radio star, maybe Second Life will save the TV star?