Over on Jon Frimann’s Iceland Volcano and Earthquake Blog, there has been a lot of talk about the activity under Vatnajökull (see map below), the largest glacier on Iceland and specifically near Grímsfjall/Grímsvötn. I thought I’d take a closer look at the great glacier of the island nation and specifically, the volcanic activity that occurs around and under the icecap (and then take my speculative stab at what might be going on near Grímsvötn).

Map of the Vatnajökull glacier, Iceland.

First things first: Vatnajökull is big (see below). Real big, at least as modern glaciers go. It covers 8100 km2 of the landmass of Iceland with a maximum thickness around 1000 m (1 km) thick, but the average thickness is closer to 400-500 m, leading to a rough estimate of the total volume of ~3300 km3 glacial ice. The glacier is still actively accumulating snow that will become glacial ice (after ~100 years) – almost 60% of the ice cap is still above what is known as the “equilibrium line altitude,” which is ~1100-1300 m for Vatnajökull. This ELA marks the boundary between the zone where snow/ice is melted away each warm season (below the ELA) and where snow/ice doesn’t melt, so it can accumulate year after year (above the ELA). The whole icecap actually pulsates throughout the year as the weather changes ~ remember, most glaciers actually have a large liquid water drainage system underneath them ~ so the elevation of the ice surface can change from 1400 to 1800 m. There are also a number of subglacial lakes under the icecap, likely produced by the high heat flow in that part of Iceland.

NASA Earth Observatory image of the Vatnajökull glacier, taking during the 2004 eruption of Grímsvötn.

Now, any glacier this large on an island as volcanically active as Iceland is bound to have a lot of subglacial volcanoes, so it should be no surprise that Vatnajökull has at least 7 identifying volcanoes under the glacier. The three most famous of the subglacial volcanoes under Vatnajökull are the aforementioned Grímsvötn, Öraefajökull and Bardarbunga. Öraefajökull, on the southern edge of the glacier, is the least active of the three, with its last known eruption in 1728 – however, that event was a VEI 4 – and the previous known eruption to that, a VEI 5(!), was in 1362. Both of these events were explosive eruptions. Bardarbunga is a part of a long fissure system that runs along the west side of Vatnajökull – in fact, it extends 100 km to the S and 50 km to the N of the glacier – and lies close to where the Mid-Atlantic Ridge comes on land in Iceland. Like many Icelandic volcanoes, it has a central caldera that then has fissures that radiate from it (the Veidvötn and Trollagigar fissures). Bardarbunga last erupted in 1910 but a number of unsubstantiated, small subglacial eruptions may have occurred within the Loki caldera over the last century. Most confirmed eruptions have been explosive eruptions that lead to lava flows and rank around a VEI 2, although the 1477 eruption from the Veidvötn fissure was a VEI 6 that produced over at least 2.5 km3 of basaltic lava. 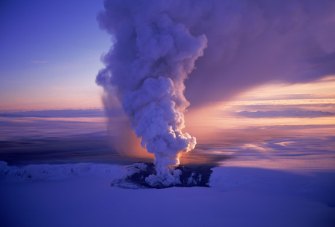 Grímsvötn erupting in 2004 through the Vatnajökull glacier.

Finally, the most famous subglacial resident at Vatnajökull is Grímsvötn – not only is it one of the most active volcanoes on Iceland, but it also erupted as recently as 2004 (see above). Much like Bardarbunga, Grímsvötn is a central edifice on a long set of SW-NE trending fissures, a set of lineaments that produced one of the most significant historic eruptions, the 1783 Laki (Skaftar Fires) fissure event. The Laki eruption produced over 15 km3 of basaltic lava over a mere 7 months over 27-km of fissures (see below). The Laki eruption did produce significant changes to weather in the northern hemisphere due to the release of volcanic aerosols like sulfur dioxide and was the source of one of the first connections between volcanoes and climate made by Benjamin Franklin (although he incorrectly attributed the eruption to Hekla) – it tends to be somewhat tenuously linked to all sorts of world events at the time. Grímsvötn has also had a number of non-fissure eruptions, producing explosive eruptions and accompanying jokulhlaups in 2004, 1996-98, 1983-84 and many more over the last few centuries. Most of these eruptions where in the VEI 1-2 scale, so fairly small, although in 1902 and 1873, the volcano produced explosive eruptions that ranked upwards of VEI 4. Grímsvötn is also known to produce jokulhlaups that are not directly related to volcanic eruption, such as the glacial outburst flood this last fall, likely caused by a breach of a subglacial lake near the volcano. 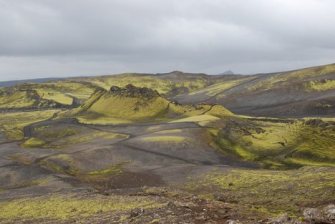 Part of the Laki fissure system that erupted in 1783.

Now, in such a volcanically active area, it should be no surprise that there is a lot of oscillation in volcanically-related activity, such as seismicity and hydrothermal activity. This is because many of these Icelandic magmatic systems are getting a constant input of magma from depth, much of it stalling at different depths in the crust, or that magma from previous eruptions continues to cool in the volcanic systems. An important interplay under Vatnajökull is between the glacier itself and the rock below – with all the fissures and crustal lineament, the weight of the glacier can potentially cause some seismicity. Iceland is also a very seismically active area due to the presence of the active Mid-Atlantic spreading center, so many earthquakes are associated with the processes of spreading. So, how does one tell if one of these volcanoes might be headed towards eruption? Using Eyjafjallajökull as an example, we might expect to see signs of an eruption for years before an eruption – and that earthquakes related to intrusion of basalt magma might not lead to an eruption directly. By combining with other monitoring tools like inflation, GPS and hydrothermal activity, we can start to get a grasp on how likely an eruption might be – and even that might be dicey. One thing can be sure: a subglacial eruption under Vatnajökull is likely because we have seen so many over the last few centuries. We have even seen a number of these large-scale (>2 km3) fissure eruptions, including the Laki eruption, so another fissure eruption isn’t out of the realm of possibility. None of these fissures have opened since the advent of modern volcano monitoring came about, so we really don’t have a good grasp on the signs that will indicate a fissure eruption might be on its way.

So, what to make of the current activity reported at Grímsvötn: (1) it isn’t surprising; (2) more likely than not, it will need to anything from no eruption to a small VEI 1-2 event; (3) it could also lead to a larger fissure event, but right now there isn’t any strong evidence that suggests it will. Iceland is a very volcanically-active region, so we should expect a lot of “noise” – lots of earthquake swarms, inflation/deflation, changes in hydrothermal activity – that is unrelated to an impending eruption. This makes the job of volcanologists in Iceland all the more difficult to discern the true volcanic signal from the noise of an active island.

Top left: A view of Vatnajökull from Höfn. Image by Flurin Juvalta.

Great art can sometimes be like a magnet—attracting hordes of admirers. The Gauguin: Maker of Myth exhibition that recently closed at the Tate Modern in London, England, drew more than […]