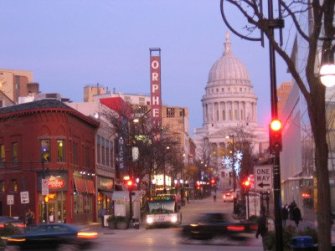 Next week on Thursday, June 25 I will be visiting one of my favorite cities Madison, Wisconsin to give a lecture titled “What’s Next for Science Communication?” It’s part of a summer speaker series sponsored by the Dept. of Life Sciences Communication and the Holtz Center on Science and Technology Studies at the University of Wisconsin.

If you are interested in the themes discussed in last week’s article at Nature Biotechnology, then you will definitely want to come out to the presentation. If you can’t make it, online video will be available and Wisconsin Public Television will be re-broadcasting the event. Details are below.

What’s Next for Science Communication?

Despite recent innovations in science communication such as deliberative forums, the application of framing research, and partnerships with the arts and humanities, these approaches are still all too commonly defined as simply novel ways to persuade the public to view scientific debates as scientists and their allies do. Instead, the question should not be how to “sell” the public on science and emerging technologies; but rather how to use communication research and its applications to empower greater public participation in the governance of these issues.

Elaborating on much-discussed articles published at Science, Environment, The Scientist, Nature Biotechnology, and other leading outlets, Nisbet argues that the sophistication of these emerging communication strategies needs to be complemented by an equally sophisticated view of public engagement. In particular, in areas such as biotechnology, evolution, and climate change, Nisbet emphasizes the need to use framing, partnerships with the arts, and new forms of digital journalism to generate “participatory conversations” with diverse publics and stakeholders that result in meaningful input on policy choices and decisions.

In this month’s issue of Nature Biotechnology, I join with other authors to suggest several bold new initiatives in science communication and journalism. The Commentary article includes an overview of […]