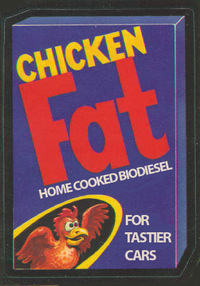 The alternative energy craze is kicking into high gear. In fact, it’s starting to remind me of tales from the Middle Ages, when everyone sought to transform a substance like lead into gold. In this case, it’s companies attempting to transmogrify waste products into clean-burning fuels. Tyson Foods is now teaming up with ConocoPhilips on an innovative biofuel scheme that involves poultry fat:

combine Tyson’s expertise in protein chemistry and production with

ConocoPhillips’ processing and marketing knowledge to introduce a

If all goes according to plan, the new chicken fuel will be appearing at gas stations in the U.S. Midwest by the end of the year. In fact, Tyson said it will begin preprocessing

animal fat at some of its North American plants this summer. So… if you’re planning to do a lot of driving during the busy summer driving season, maybe you’ll be able to pick up the pungent smell of chicken fat being boiled over a special sulfur bath at a highway chicken fuel plant.