While the two asteroids passed within the moon’s orbit, they didn’t pose a threat to our planet. These types of near misses happen quite frequently—and even if something this small were to hit the Earth, it would break apart in the atmosphere and burn up before it hit the ground. Larger asteroids, however, don’t burn up—such as the famed Tunguska event where an estimated 200+ million-pound space rock entered the atmosphere of Siberia and detonated in the sky producing a fireball, releasing energy equivalent to almost 200 Hiroshima bombs. 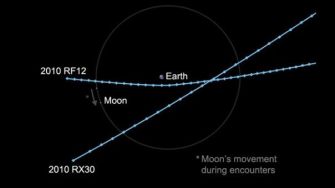 In my last couple of blog posts (NASA is Running out of Money to Monitor Earth-Destroying Asteroids) I wrote that it would be short-sighted and unwise not to fund NASA’s continued monitoring of extraterrestrial objects. This time—even though the asteroids were small—NASA did spot the objects three days in advance and successfullyplotted their orbits. Donald Yeomans, manager of NASA’s Near Earth Program, which tracks potentially hazardous asteroids and comets within 28 million miles of Earth stated that “It just confirms that the process we have in place—whereby we observe and find them and then we quickly predict when they’ll pass Earth and get that info out—that process works pretty well.” So, I guess we could only hope that the tracking and monitoring systems continue to work well and somewhat give us a “heads-up” if you will.

President Obama’s plan for the space organization calls for a mission to send astronauts to an asteroid at some point in the future. Well, Lockheed Martin says it’s “Plymouth Rock” mission proposal could put astronauts on a “near Earth asteroid” as early as 2016. Details of the Lockheed Martin’s Plymouth Rock mission proposal and landing astronauts on a near Earth asteroid will be discussed in a future blog entry, so be sure to stay tuned.

Well, it has been a long week and my brain is pretty close to liquified after teaching and submitting my paper, so let’s end the week with the first Mystery […]