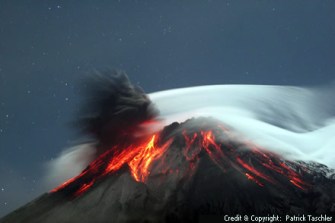 Tungurahua, one of the most active (and harder to pronounce) volcanoes in the Andes, has been experiencing explosions over the last few days. Not much in the report beyond the 125 explosions, increased seismicity and ashfall around the volcano. This is fairly typical behavior of Tungurahua: Strombolian-style eruptions (see the picture above for a great example) with ash and blocks being ejected from the crater. The volcano has been continuously erupting since 1999.