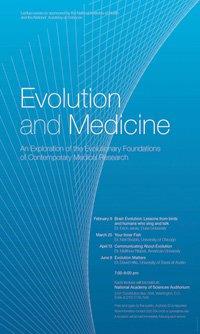 For DC readers, as part of a spring lecture series on evolution and medicine sponsored by NIH and the National Academies, I will be speaking tonight at 7pm at the National Academy of Sciences Auditorium at 2101 Constitution Avenue, NW (adjacent to the State Department and National Mall.) Go here for more information on the free talk.

The topic of the lecture is “Communicating about Evolution” and I will be discussing themes covered in recent articles and forthcomingbook chapters. I previewed some of these themes in video interviewsegments last year with Big Think.

Here is a synopsis from the NIH site on the series:

How can scientists and lovers of science communicate effectively with students and the public? Long gone is the assumption that mountains of evidence are sufficient to change opinions. Instead, Matthew Nisbet argues that scientists need to understand audiences’ worldviews and values. He outlines methods for engaging diverse audiences around the meaning and implications of evolutionary sciences.

Dr. Matthew Nisbet is Assistant Professor in the School of Communication at American University. He has conducted research and written extensively about communication dynamics in policy debates.

When pundits like Richard Dawkins use the trust and authority granted them as scientists to denigrate religious publics, is it unethical?On issues such as climate change, nanotechnology, and evolution, research […]