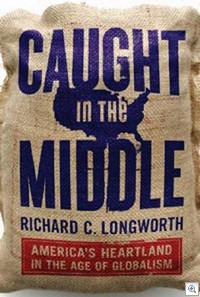 State officials know perfectly well that globalization will swallow their traditional industries. But they’re stuck. Workers vote, and a voter who has just lost his job will be an angry voter. . . . Every time a factory dies, its workers go from a private payroll to the public dole; . . . unemployment pay and retraining costs take money away from programs, such as education, that might offer some advantage in the new economy. And so the pressure builds to subsidize the old industries, to do anything to keep them from moving away. . . . The time and money [states] spend trying to keep twentieth-century jobs prevent them from creating twenty-first century jobs. (pp. 3536)

The dirty little secret of Midwestern manufacturing is that many workers are high school dropouts, uneducated, some virtually illiterate. They could build refrigerators, sure. But they are totally unqualified for any job other than the ones they just lost. (p. 56)

[Caught in the Middle: America’s Heartland in the Age of Globalism]

We are the biggest obstacle

Michael Port says…Revolution is about one person at a time experiencing their own personal empowerment against an existing, deficient (small thinking) system. (p. 13)We are the biggest obstacle that stands […]