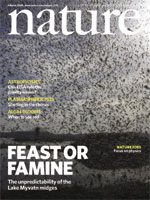 In his regular column at Nature this week, David Goldston weighs in on the themes discussed at the AAAS panel “Communicating Science in a Religious America,” which Goldston moderated. In the column titled “The Scientist Delusion,” Goldston notes that even very religious publics often strongly support many areas of science. To use as bogeymen and as a rallying cry “religious fundamentalists” and a “public hostile to science” doesn’t make much sense and may even serve to harm the goals of promoting science in the United States. As he writes:

The point here is not that there’s nothing for scientists to worry about or that they should cease their efforts to teach evolution. But it is important for scientists to understand that they do not face a public inherently hostile to science (even among the relatively small percentage who are fundamentalists), and that public attitudes towards both science and religion are complicated and often contradictory. It’s not even clear what most people mean when they say they don’t believe that humans have evolved. Is this detail a matter of some concern to them, or is this just a casual way to say that they viscerally reject the notion of a random Universe? Evolution is largely a symbolic issue to the public, and may be a poor measure of how religious attitudes affect the reception of science more generally.

Recognizing the complexity of public attitudes, a number of scientists and other scholars are trying to develop language to discuss evolution in ways that might build bridges to the religious. These efforts were the subject of a well-attended panel I moderated at last month’s annual meeting of the American Association for the Advancement of Science in Boston, Massachusetts. Some panellists, in effect, advocated co-opting the language of religion. For example, Kenneth Miller of Brown University in Providence, Rhode Island, the author of a leading textbook on evolution and a practising Catholic, talked about embracing the notion of life having a design, but explaining it as the result and embodiment of evolution. Others, such as Matthew Nisbet, a communications scholar at American University in Washington DC who organized the panel, suggested moving the discussion away from scientific theory and talking about the medical and other benefits that have resulted from understanding evolution.

If there is tension with religion in the future, Goldston goes on to note that evolution in fact may not be the big source. Instead it may be advances in neuroscience and/or genetics. In these areas, Goldston–a former Chief of Staff of the House Science committee–concludes it will be likely necessary for scientists to work together with a plurality of publics, including religious leaders, to craft ethical frameworks and guidelines:

Responding to these issues will be difficult for scientists and non-scientists alike. New discoveries about the human genome and neuroscience will no doubt be clearly linked to potential medical advances, but they may also raise new questions about what kinds of interventions are appropriate. The conundrums may leave even atheists longing for some theological guidance on how to decide what is moral. And wandering about this uncharted territory may make the well-rehearsed battles over evolution seem like the good old days.

At Point of Inquiry, Communicating about Science & Religion

In this week’s Point of Inquiry podcast, host DJ Grothe and I share a wide ranging discussion about the relationship between science and religion in the United States and the […]