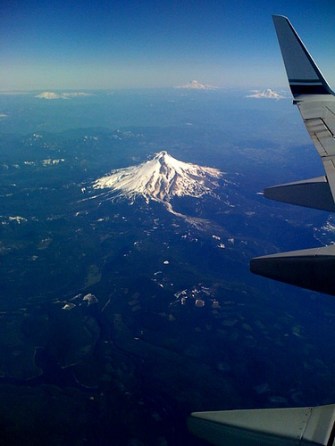 Remember a few months ago when an abstract from a meeting got people are ruffled because the study said there was a “giant magma chamber” feeding all three of St. Helens, Adams and Rainier in the Cascades? Well, Nature Geosciences has been kind enough to publish the work (the article) and yes, yet again, we can say it is still most likely not true at all.

Graham Hill and others claim that their magnetotelluric work in the Cascades show that a vast magma chamber (at only 12-15 km depth!) connects all three of the southern Washington volcanoes of St. Helens, Adams and Rainier. Hill goes as far as to claim “our results speak for themselves,” which, in my world, is code for “we don’t have a foot to stand on.” Anyway, I (along with others) have already picked apart the thermal, geochemical and geophysical reasons why this isn’t feasible – the magma compositions at all three volcanoes each tell there own story, which is evidence enough that this magma body isn’t feeding all three. However, the most damning indictment comes from Dr. Steve Malone (UW) – a man who knows his Cascades and the structure of the arc – who said: “The geothermal evidence for what Graham suggests is nonexistent. There is also no seismic evidence for such a magma pool.” Well, then.

So, although the authors of the paper claim the take-home message is “there is evidence of a primary magma pool that feeds the chambers underneath the volcanoes”, I think the real take home message is that maybe there is evidence that there is some amount of melt (5%? 1% 0.1%) under the southern Washington Cascades – heck, I’m sure there is, but I would bet dollars to donuts that there is no “vast swirling cauldron of magma” that is the single source for all these volcanoes. (Or maybe the take home message is that Nature and Science will always choose controversy over good science).

UPDATE 10/25/09 5:45 PM: Hidden midway through a Seattle Times article on the paper: “The team estimates only 2-12 percent of the rock is actually molten.” (note: my emphasis) If that is their conclusion, that is is absolutely nothing new. Partially molten crust – as an area of interconnected (or not) lenses of melt is nothing new – just their dramatic spin as a “common magma chamber” is … headline-grabbing “science” at its worst.

Exhausted from a great GSA, its time for Mystery Volcano Photo #10.