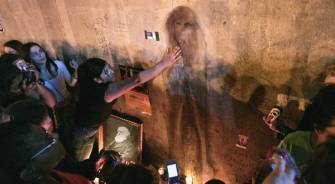 “Behold the power and glory of the scientific method!,” quotes The Onionin a satirical spoof of science enthusiasts flocking to a wall stain of the image of Darwin (above.) The parody plays on the type of religious-like hero worship of Darwin and hardline atheist scientists that is common to some of the discussion threads here at ScienceBlogs.

As the Onion article hilariously describes of the sacred image:

Despite the enthusiasm the so-called “Darwin Smudge” has generated among the evolutionary faithful, disagreement remains as to its origin. Some believe the image is actually closer to the visage of Stephen Jay Gould, longtime columnist for Natural History magazine and originator of the theory of punctuated equilibrium, and is therefore proof of rapid cladogenesis. A smaller minority contend it is the face of Carl Sagan, and should be viewed as a warning to those nonbelievers who have not yet seen his hit PBS series Cosmos: A Personal Voyage.

Still others have attempted to discredit the miracle entirely, claiming that there are several alternate explanations for the appearance of the unexplained discoloration.

“It’s a stain on a wall, and nothing more,” said the Rev. Clement McCoy, a professor at Oral Roberts University and prominent opponent of evolutionary theory. “Anything else is the delusional fantasy of a fanatical evolutionist mindset that sees only what it wishes to see in the hopes of validating a baseless, illogical belief system. I only hope these heretics see the error of their ways before our Most Powerful God smites them all in His vengeance.”

To say that Republicans are anti-science has always been an extreme over-simplification, the type of characterization that carries weight at liberal blogs but doesn’t really match up well with political […]