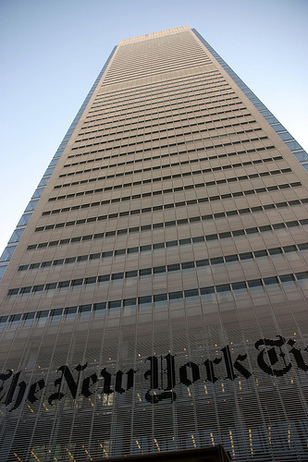 According to one academic study that became popular a few years ago, companies erecting brand new skyscraper headquarters will soon become victims of a downward spiraling stock price. (Similar studies show a strong negative correlation between CEO home prices and the stock price of the company.) For supporting evidence, one need look no further than the New York Times, which is in the process of building a heroic monument to Old Media right in the heart of the Times Square area of New York City. The building is a tangled mass of steel that reaches into the sky like a Colossus. At the same time, savvy fund managers are now dumping the stock as fast as they can. Shares of New York Times Company reached a 10-year low recently and are down more than 21% in the past year. Ah, hubris.

The Wall Street Journal referred to it as “Target’s never-ending quest to be hipper than the competition” — an upcoming fashion show that will feature holograms instead of models. The […]