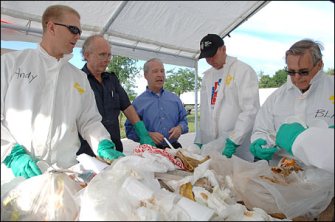 Evangelical leader Joel C. Hunter, a registered Republican, will give the closing prayer at the Democratic National Convention on Thursday, joining Al Gore and nominee Barack Obama on stage in front of 70,000 stadium goers.

Hunter opposes abortion and at one time had been chosen to lead the Christian Coalition. According to the Washington Post, for several years he has been at the forefront of a so-called “New Evangelical” movement dedicated to moving beyond the divisiveness of culture war issues.

“I’ll kind of be the elephant in the room, but it really says something about how far Senator Obama is reaching out,” Hunter told the Washington Post. “We are expanding the agenda of what’s pro-life. When you consider poverty, environmentalism and war … those are the issues that are being addressed by the Democratic Party.”

Hunter credits the documentary film The Great Warming–a film I wrote about at Science and that I have spotlighted at this blog–for motivating his work on climate change, with Hunter mobilizing his 12,000 member church around the issue.

Watch below Joel Hunter’s remarks at a Third Way press conference on his efforts to bring communities together around common values and problems such as poverty and global warming. “Ideology can be transformed into progress so that everyone can advance down the field, so that there can be common progress for the common good,” says Hunter.

That’s the plan here in the nation’s capital. From today’s Washington Post:Beginning in October, 3,000 students at 14 middle schools will be eligible to earn up to 50 points per […]