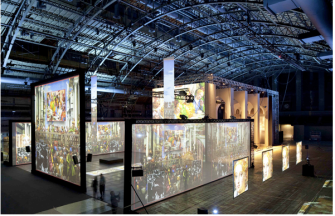 Of late, I’ve been thinking a lot about visual storytelling and the various ways that the Internet and digital devices like the iPad require us to process information and content. Over the past decade, there has been an astounding rise in the value of visual literacy — the ability to process information and content that is delivered via images rather than text. When you think about it, all of the most popular forms of new Internet content – whether infographics, casual games or video clips – place a premium on visual storytelling. At the end of the day, the Apple iPad is primarily a device for consuming visual content.

Which is why I’ve been on the look out for new forms of visual storytelling and new ways of exploring visual literacy. Take, for example, the new Park Avenue Armory exhibit Leonardo’s Last Supper: A Vision by Peter Greenaway, which attempts to encourage a new dialogue between painting and cinema. The show takes place within a full-scale replica of Milan’s Refectory of Santa Maria delle Grazie, complete with a “clone” of The Last Supper projected on multiple walls, which is then brought to life over 45 minutes using a manipulation of light, sound and theatrical illusion. As Greenaway (best known as the director of The Cook, The Thief, His Wife & Her Lover, less so for his 50+ short films and documentaries) points out in the liner notes for the show, the work is a provocation to reconsider our approach to visual literacy in the 21st Century. What happens when the 10 seconds you might spend looking at a masterpiece painting in a museum gets transformed into a 45-minute cinema-like walk-through experience?

“We have had two thousand years of Western painting and only 115 years of cinema. Both are supposedly in the business of delivering ideas by making pictures, by making images. Do they do it well? Do they share the same language? Are they in the same business? […]

Supposing we try to hold a dialogue between the two? To mingle and share and cross-refer their vocabularies… To use painting to fix and stabilize and limit and frame the image… and to use cinema to make a painting move and change, have a temporal life and have a soundtrack…

That’s exactly what Greenaway did – he took DaVinci’s famous painting and gave it movement — through changing colors, changing shadows, different atmospheres, music and even dialogue. The goal, of course, is to discover the multiple layers of meaning in the painting and to explore the techniques used by DaVinci – whether it is the painting’s various light sources, the atmosphere and tonality of the work, the relationships between the figures within the painting – even the arrangement of the food and cutlery on the table. Throughout the show, you are free to move about and consider the work from your own unique perspective.

With the arrival and popularity of the iPad and other devices for consuming digital content, are we seeing the development of a new and fascinating era for storytelling that uses video content in entirely new ways?