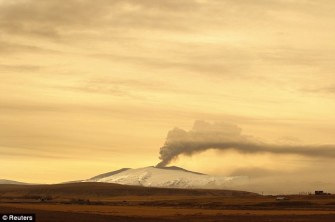 nThe small steam plume from Eyjafjallajökull on May 23, 2010, where explosive eruptive activity has ceased for now.

The big news over the weekend, at least volcanically, was that Eyjafjallajökull seems to have entered a period of relative quiet. The eruption has died down dramatically, with the last ash explosion occurring two days ago. Since then, the vent has still be producing a significant steam plume that reaches 3 km / 10,000 feet, but none of the ash-laden explosions that marked the earlier parts of the eruption have occurred (meaning the airspace over the North Atlantic and Europe is nearly ash-free). The Icelandic Met Office also mentions that the hottest temperature observed at the vent area is only ~100 degrees C and no active lava extrusion can be seen. Unfortunately, the IMO did decide to call the eruption “dormant”, which is probably a poor choice of words considering its other usage in volcanology that implies the volcano has had a long period of inactivity, but the point is clear: the eruptive period that started over a month ago underneath the glacier at Eyjafjallajökull is over.

Now, to say that the eruption is “over” is much too premature. Volcanoes will enter periods of quiescence during eruptions all the time, where the eruption will stop until magma begins to rise into the vent area again. The seismicity has died down under the volcano, but it is still present, so this might imply that we could expect intermittent explosions. However, we could also just be seeing the end to the eruption – if the magma supply has ended, then that might be the whole show. Since the opening of the fissure at Fimmvörðuháls, there has been almost two months of eruptive activity, which is shorter than some people expected, but still a significant period of time considering how constant the eruption was. One group that will be happy to see the volcano go quiet will be the airlines, which now claim to have lost nearly $1.7 billion due to the airspace closures from the ash. However, for the rest of us, if this is the end (and I’d be surprised if it was), then we’ve all experienced an eruption of a generation in the way it captured the attention of the planet.

We have two descriptions of the Universe that work perfectly well: General Relativity and quantum physics. Too bad they don’t work together.
Up Next
Guest Thinkers

The latest USGS/Smithsonian Volcanic Activity Report, with news from Chile, Costa Rica, Russia and beyond!