We’ve been reading a lot lately about the rediscovered remnants of the Pink and White Terraces (also known as Te Tarata and Otukapurangi) near Mt. Tarawera in New Zealand, but I realized that many of you probably haven’t heard much about the eruption that buried these lost wonders. The 1886 eruption of Tarawera was one of the most interesting eruptions in the last few hundred years ~ and even a VEI 5, so nothing to sneeze at as well. So, today I thought I’d give you the details on the great 1886 eruption that buried and/or destroyed the Terraces, along with a little background on the area near Tarawera.

Now, Tarawera is very near-and-dear to me as it is one of my field areas of research. In fact, I’m currently in the last throws of a couple research papers on the previous eruption at Tarawera before the 1886 eruption – the Kaharoa rhyolite eruptions in ~1300 A.D. that produced most of the domes that make up the modern edifice known as Tarawera. The volcano itself is part of a larger caldera cluster, the Okataina Caldera Complex (OCC), that contains volcanic deposits – some larger than 150 km3 – that date back as far as 300,000 years ago (see Smith et al., 2005) and are all part of the volcanism on the North Island of New Zealand. Many of you are likely familiar with another caldera cluster further south, the Taupo Volcanic Complex, that produced the ultraplinian eruption of 186 A.D., one of the largest eruptions in the last 10,000 years. The OCC, although not as flashy as Taupo, is still a significant volcanic area, erupting over 350 km3 in the last 60,000 years. Tarawera is just the youngest of many rhyolite dome complex in the OCC, which has erupted dominantly rhyolite and basalt (more on that later). 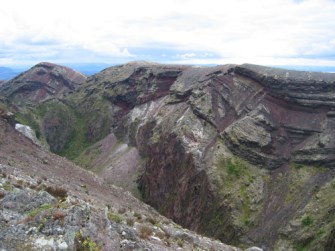 The rift along the top of Mt. Tarawera, with the dark red 1886 deposits overlying the light-colored ~1300 A.D. Kaharoa deposits. Image by Kari Cooper, 2006.

The ~1300 A.D. eruption of Tarawera was rhyolite, producing block-and-ash flows, fallout and domes that comprise the volcano. Now, it is thought that the Māori, the native people of New Zealand, didn’t arrive permanently on the islands until 1350 A.D. (yes, New Zealand was people- and heck, mostly mammal-less before then), so there are no historic or oral records of the eruption, however, there is the story of Tamaohoi, the fierce cannibal chief of the tangata-whenua, who was imprisoned forever in a chasm, deep down in the bowels of Tarawera roughly 500 years before the 1886 eruption. The Kaharoa eruption would have been impressive to see, producing ~5-7 km3 of rhyolite over what is thought to be a few years time. The eruption itself was likely triggered by an intrusion of basalt into a rhyolite mush (see Leonard et al., 2002) under the volcano that heated up and remobilized the rhyolite, although there is very little evidence of the basalt itself in the eruptive product. However, the eruption of 1886 seems to lend credence to the basalt trigger theory.

After the 1300 A.D. eruption, there is little evidence for eruptive activity (beyond phreatic explosions) in the Tarawera region. However, the area had extensive hot spring and hydrothermal activity and at Lake Rotomahana, this activity produced the Pink and White Terraces as silica from hot water was deposited at the surface in the form of chalcedony – we see this today at Yellowstone where hot, silica-rich water reaches the surface. However, starting in early June 1886, that track record of quiet was about to change.

Before we get into the story of June 10, 1886, let’s give credit where credit is due. Much of the description of the eruption comes from Ian Nairn’s excellent 2002 volume about the OCC (which is sadly hard to get a hold of outside of New Zealand). Dr. Nairn is one of the true guru’s about New Zealand volcanology and especially the Okataina area. I have to admit, when I had a chance to have tea on Dr. Nairn’s porch over looking Lake Rerewhakaitu (see below) and Tarawera with some colleagues and talk volcanoes, I can see why someone would want to work (and retire) in New Zealand. 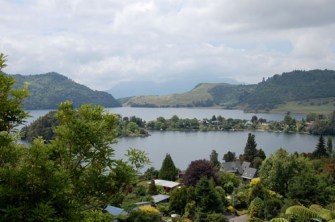 The view from Ian Nairn’s porch, with Tarawera in the far background partially obscured by clouds and Lake Rerewhakaitu in the foreground.

The first signs that Tarawera might erupt – and there weren’t many – came on June 1, 1886. A series of waves appeared on the surface of Lake Tarawera, some of them up to 0.3 m / 1 foot high that suggests seismicity had begun underneath the volcano. This is the same day of the alleged “ghost canoe” sighting on the lake, when tourists going across Lake Tarawera claimed to have seen a Maori war canoe filled with warriors on the lake in the mist. This event was interpreted by Maori priests has a omen of a great calamity (although as you can imagine, there is much debate about what those tourists actually saw on the lake).

After the events of June 1, little was noticed for signs of renewed activity at Tarawera – in fact, many geologists didn’t even consider the edifice to be an active volcano as it lacked any solfataric or fumarolic activity (at least on the summit). However, starting just after midnight on June 10, earthquakes began to rock the area near the volcano. After the onset of these earthquakes felt by residents, it was likely only about 1 hour before the eruption began. Eyewtiness accounts of the eruptions don’t always converge, but overall it appears that the eruption began sometime between 1:30-2:30 AM, likely starting from the northeast side of Tarawera and spreading southwesterly along a long fissure, from Tarawera to Lake Rotomahana into the Waimangu Valley, over the next few hours.

Now, this fissure eruption was no ordinary basaltic fissures. Descriptions of the eruption along with analysis of tephra dispersal around the North Island indicate that the eruption plume was, early on, 9.5 km / 31,000 feet tall and got as high as 11 km / 36,000 feet later that morning – a true basaltic plinian eruption. This is remarkable as the magma being erupted was basaltic, so such a large explosive event might not be expected. Interestingly, in the OCC, all the basaltic eruptions found in the geologic record appear to be explosion – i.e., no lava flows – so the magma under the OCC might be especially vapor-rich. Beyond that, there is abundant ground and surface water for rising basaltic magma to interact, so phreatomagmatic explosions are in the cards as well, and that is what appears to have happened at Tarawera. A series of basaltic dikes rose from depth and intersected the very active hydrothermal system under Tarawera and Lake Rotomahana, causing rapid steam/magma explosions, driving the plume that was observed and creating, by some accounts, fire fountains as tall as 2 km (see painting below). One other aspect that could have helped drive the explosively is interaction of the basalt with the remnant rhyolite mush from the 1300 A.D. eruption ~ and abundant partially-melted inclusions of the rhyolite can be found in some of the 1886 basalt deposits.

Charles Blomfield painting of the 1886 eruption of Tarawera.

The ash fall from the eruption – called locally the “Rotomahana Mud” – can be found into the Bay of Plenty, almost 40 km away. This tephra covered 15,000 km2 over the North Island and over 4,500 km2 of the area with at least 5 cm of tephra. The eruption itself produced at least 1.3 km3 of tephra (~0.7 km3 of dense rock equivalent), likely at a rate of higher than 6 x 104 m3/s. The eruption also produced a base surge that travelled over 6 km from the craters moving 40 m/s and were large enough to top hills that were 360 meters tall. These surges, along with the thick tephra fall, buried a number of villages near the volcano, mostly populated by Māori, including the now-famous Te Ariki and Moura, along with Te Tapaharo, Totarariki and Waingongogongo – and this is where most of the 100-120 people that were thought to have died in the eruption were killed. The noise of the explosions were heard as far away as Auckland to the north and Christchurch to the south and the events of June 10 also produced abundant lightning, winds and seismicity.

By 6 AM on June 10, the eruption was, for all intents and purposes, over. The eruption lasted as little as 4 hours and with a total of 1.3 km3 erupted, a rate of ~0.3 km3 per hour, thought to be one of the highest rates of eruption in recorded history. Steam explosions continued through August 1886 and the first visitors to the destroyed landscape didn’t see the changes until then. The explosions, both magmatic and phreatic, left a series of craters through the Waimangu Valley, much of which is still hydrothermally active. In fact, for the first few decades after the eruption, the Waimangu Geyser was the largest in the world (see below), almost more of a controlled explosion than a geyser, but a large explosion stopped the flow to the geyser. The Waimangu Valley has seen occasional phreatic explosions since 1886, one as recently as 1981. Lake Rotomahana experienced a dramatic change in shape, extending its length by a factor of four and the lake surface (not depth) rose by 30 meters – and the famed Pink and White Terraces were buried and/or destroyed by the eruptive products. Even after all the destruction, the area has recovered quickly – you can see how the Waimangu Valley has recovered. Today, beyond the hydrothermal activity in the Waimangu Valley and at the bottom of Lake Rotomahana, only weak fumaroles exist on Tarawera itself. 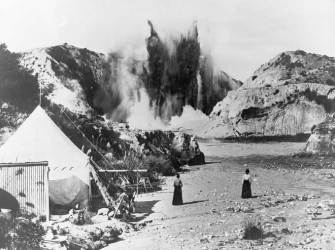 So, now you know what happened near Tarawera in that early morning of June 10, 1886: one of the most explosive basaltic eruptions on record. The Pink and White Terraces, although not truly “destroyed” are still gone, likely sealed underwater. There is a chance that new terraces could form if warm springs, heated by the magmatism under Tarawera, start bringing silica-rich waters to the surface, but it will be hundreds, if not thousands of years until something like Te Tarata or Otukapuarangi can form again.

Top left: The steaming hydrothermal pools in the Waimangu Valley.

This week, Al Jazeera English has launched a major advertising campaign branded, “Demand Al Jazeera in the USA,” to stir public demand for access to the cable news channel.  What […]