Alright, so the title of the post is a little cheeky, but right now it appears that the eruption of Grímsvötn that started last Saturday (May 21) is for all intents and purposes over (at least for the time being). Although there is still some minor explosive activity from 3-4 tephra cones near the crater, it appears that larger plumes (>3 km) have not been seen at Grímsvötn for over 24 hours. A group of geologists ventured to the crater region (see below) and found upwards of 130 cm of ash deposited in some places near the vent.

The IMO has posted a great collection of images from the Grímsvötn eruption – starting with the big bang on May 21 through to today – it is almost like a timelapse of the changes in the volcano over the 4-5 days of eruption. You can also get a close up of the crater itself in another IMO post. In the main image you can see the multiple tephra cones surrounded by the remains of the crater lake, suggesting the main thrust of the eruption might have been from multiple vents. There is now plenty of video as well of the eruption both when it was a towering 20 km plume producing its own lightning to the smaller surtseyan explosions of the last few days. 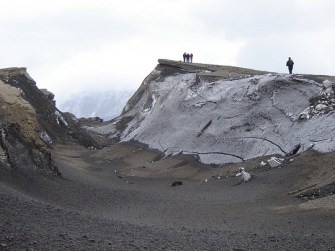 Ash deposits near the vent at Grímsvötn seen on May 26, 2011. Image courtesy of the IMO.

I’ve seen a lot of information on the atmospheric effects of the Grímsvötn eruption – including a great sequence showing how the sulfur dioxide from the plume spread across the northern latitudes as seen by the NASA Aqua satellite and how the ash plume grew during the eruption as seen by the NASA Terra satellite. I also liked the weather radar images of the ash plume during its last gasp (see below), where the thick, hot plumes sticks out through the clouds as the radar swept across southern Iceland. 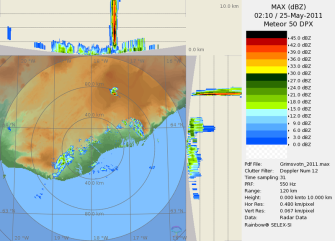 Weather radar showing the last tall ash plume from Grímsvötn seen on May 25, 2011 at 2:10 AM. Image courtesy of the IMO.

As for European air travel, almost everything is back to normal. There will still be ash in the atmosphere over the North Atlantic even into the weekend as it swirls in the winds, but most air traffic has resumed. Volcan01010 does a nice job debunking any claims that the ash wasn’t a threat to air travel in the region as well. Not surprisingly, the verdict is split on whether EU officials handled the ash hazard better or worse than in 2010, but it seems like more changes in the ash rules are on the way (by letting aircraft fly underneath the ash … gulp). However, this does seem like an ideal situation to test the AVOID (Airborne Volcanic Object Identifier and Detector) system and easyJet will do just that. In Iceland, clean up and recovery has begun in the regions hardest hit by the ash and it seems that little damage was done to the tourism economy of the island nation from the flight disruptions.

Now, should we expect this to be the end of the eruption? That is an excellent question. There is still minor seismicity under the volcano, which isn’t too surprising as magma moves in the magmatic system under Grímsvötn. Jon Frimann wonders how over is the eruption considering the persistent volcanic tremor that hasn’t reached background levels yet, but as of right now, things are fairly quiet at Grímsvötn.

Check out all the posts on the Grímsvötn eruption to find all the details:

Top left: An image of the ash plume and ash-covered glacier seen a few days after the eruption began, taken by Árni Sigurðsson. Click here to see the originals, courtesy of the IMO.

A Message to War Criminals: “We shall find you”

The arrest of former Serbian military chief, Ratko Mladic finally begins to draw a line underneath the unspeakable savagery that characterised the break-up of the former Yugoslavia. Mladic was the […]