Commercial space tourism is no longer such a distant dream. Over the next decade or so, we are going to start seeing the development of quite a few interesting relationships and partnerships all over the world where entrepreneurs offer to take visitors into orbit.

This week, Boeing announced that it has teamed up with Virginia-based Space Adventures, Inc. to start marketing the sale of passenger seats for future flights into space with a new capsule that will deliver participants to the International Space Station. The CST (Crew SpaceTransportation)-100 spacecraft looks like a cone (below) and is about 15 feet wide with the ability to carry up to seven individuals aboard the Russian Soyuz spacecraft on top of an expendable rocket.  When the ride is over, the capsule simply falls back to the Earth with the helpof a few parachutes. Test flights are currently scheduled to begin in 2015. 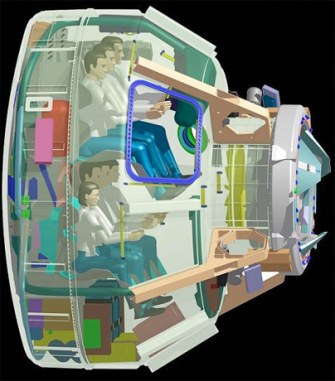 Space Adventures has been in the spaceflight business for over 10 years, and is the first company to have sent private citizens to space. To date, they have successfully contracted and flown seven spaceflight participants on eight missions to the International Space Station. They offer several packages including $4,950 zero gravity flights, which offer the experience of weightlessness in a specially modified Boeing 727 which they have named — G-Force One.

(If you remember, this is where famed Cosmologist Stephen Hawking experienced his first Zero-G experience).

Space Adventures also offers Orbital Space flights where you can spend up to 12 days in space, travel at around 17,500 mph and circle the Earth every 90 minutes. These suborbital spaceflights start at around $102,000 to reserve a seat and will give you breathtaking views of our planet by seeing it from a distance of 62 miles above. Now, they are inviting you to join them for the most significant private expedition of our time—a private mission to the circumnavigate the moon; bringing you within just 100 km of the moon’s surface. Watch the Space Adventures Video Presentation for their Lunar Mission Program

According to a September 15th press release, the agreement states that Boeing is continuing to advance its design for the CST-100 spacecraft under NASA’s Commercial Crew Development Space Act Agreement. In mid-July, Boeing released several artist’s renderings of it’s CST(Crew Space Transportation)-100 spacecraft which will deliver it’s passengers to both the ISS and the Bigelow Aerospace Orbital Space Complex (image below). The CST-100 is a bit larger than Apollo but smaller than Orion, with the ability to be able to launch on several different rockets including the Atlas, Delta and Falcon. The price hasn’t quite been set for a seat on the CST-100 and the co-founder of Space Adventures, Eric Anderson, stated that the company isn’t quite ready to talk about the price yet. They did however state that the pricing matrix would be competitive to the current Russian launches on the Soyuz spacecraft which is currently used by Space Adventures. To give you an idea, the Canadian billionaire, Guy Laliberte ponied up about $40 million for his last trip to the International Space Station. Find out a bit more about all of the extended training that he had to go through in order to qualify for his trip by clicking here. Mr. Laliberte had to undergo almost 200 days of intense training to prepare for this spaceflight to the Space Station — Find out a bit more about the training by reading extracts from Guy’s blog. If you navigate around the Space Adventures website, you can find lots of interesting videos, demonstrations and even video blogs and recordings from past passengers.

So, although the pricing will most likely be far to much for an average individual to reserve a seat, it’s like anything else—pricing eventually goes down as more players enter into the game. Perhaps in a couple decades, pricing might be a bit more reasonable, and we’ll all be headed into orbit.

The Most Secretive Election Since Watergate

The New York Times has an important editorial on how this election cycle is shaping up to be the most secretive “since the Watergate years,” thanks to subterranean rivers of […]